Here is my list of Gold Ball Players to keep an eye on this year. PES 2021 has some nice young, promising players for pretty much every position you need.

Obviously, this is just my opinion. I took into consideration their attributes, skills and playing style per position, along with their potential when fully trained. 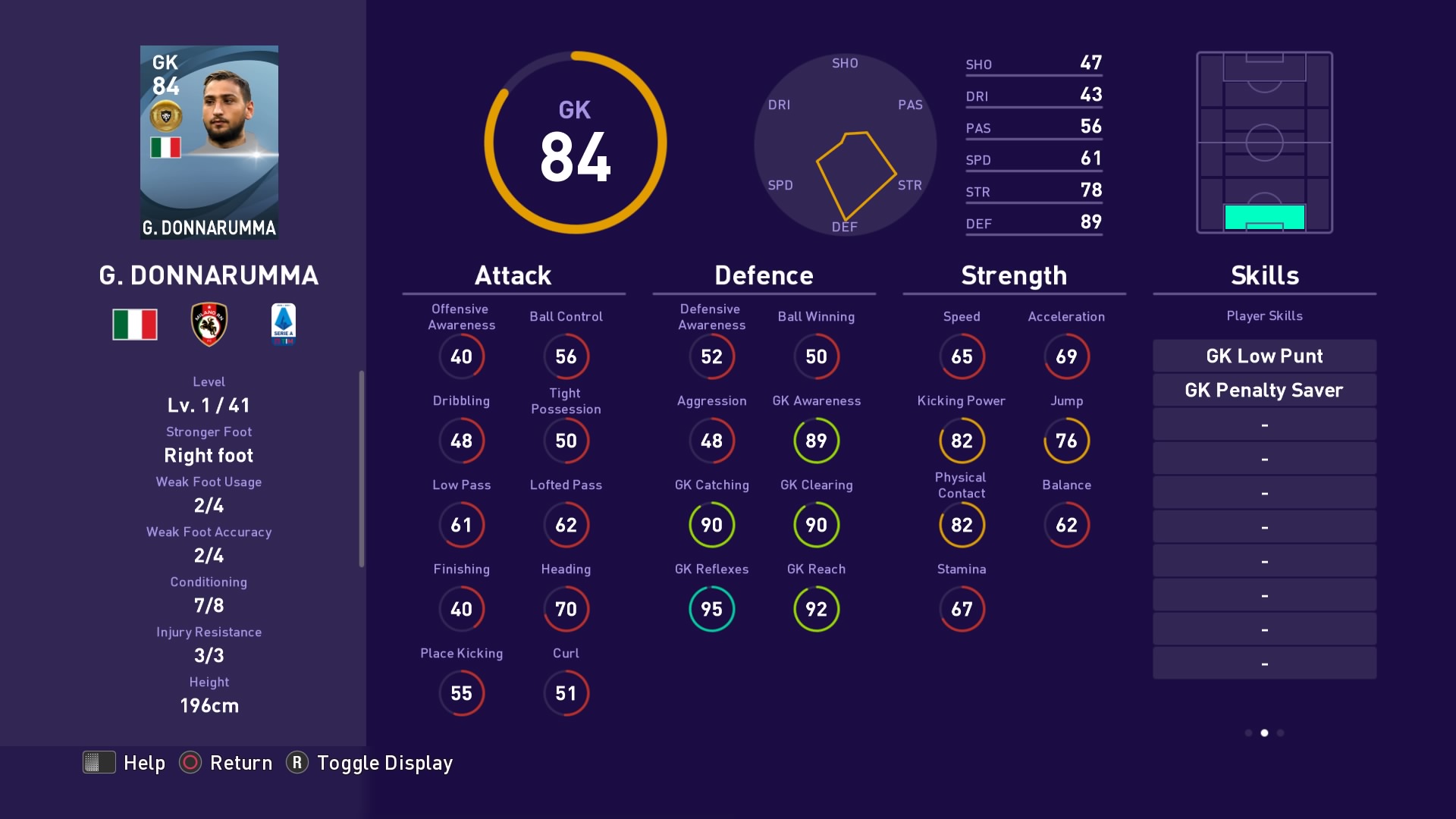 AC Milan's young goalkeeper has returned to "Gold ball" status this year but is still one of the best keepers in the game, especially when fully trained.

He's very tall (1.96m), has the 2 most sought-after skills for the position (Penalty Saver and Low Punt) and his Conditioning (7/8) ensures he will be able to play on most games.

Alternatives: have a look at A. Lafont (Nantes) and A. Onana (Ajax). 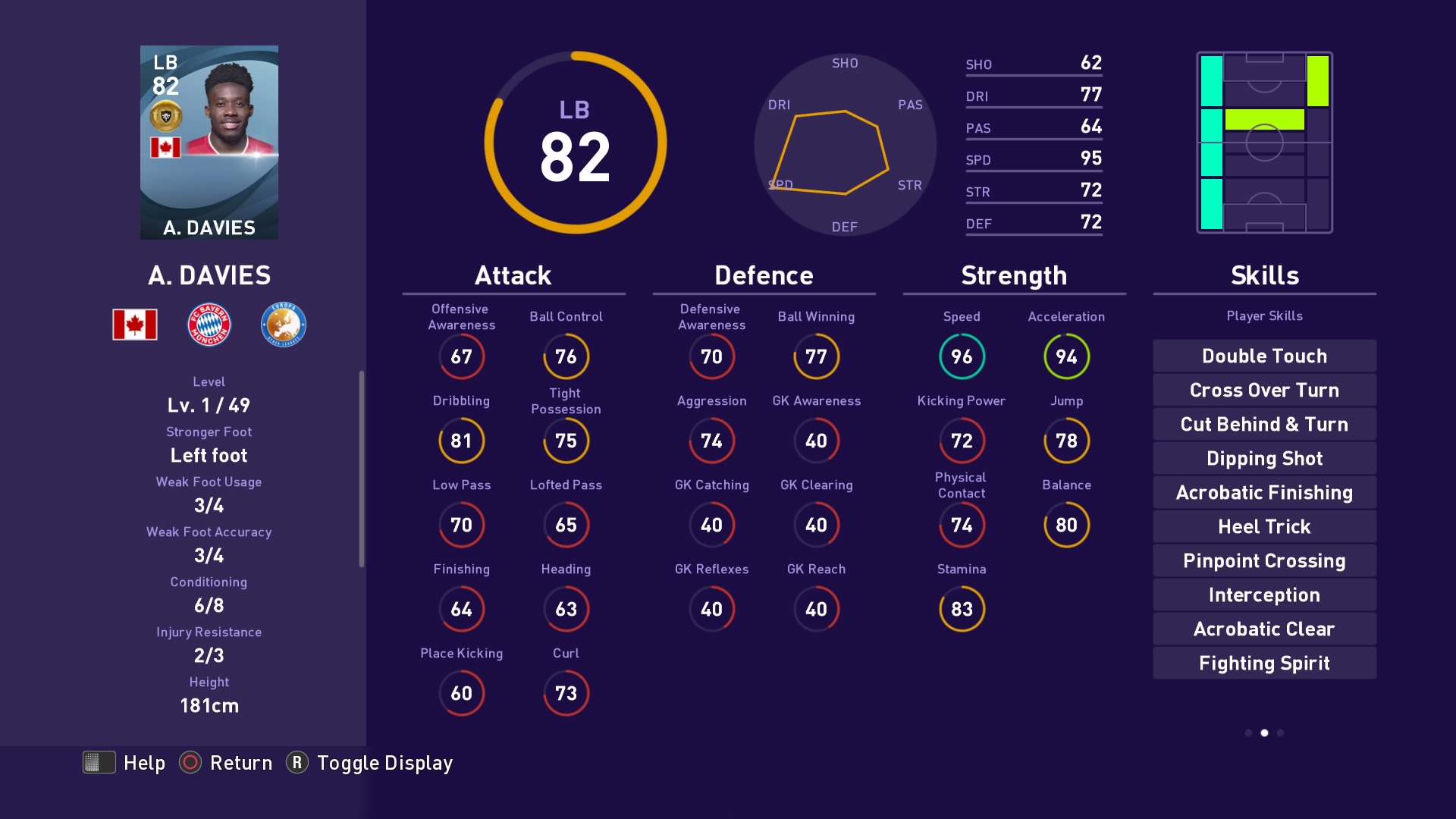 Davies had an amazing season last year, so this year he got promoted to Gold ball. Known for his insane speed, he can play in the entire wing - LB, LMF or LWF.

In terms of Skills, he has the "double touch", which I consider the most effective skill for a winger, and "pinpoint crossing" for deadly assists.

With Bayern often dominating their opposition in the domestic league, it shouldn't be uncommon to see this player with "A" or "B" in the weekly Live Condition ratings.

Davies can be signed with free scouts (25% chance) with Other (Europe) / LB / Dribbling.

Alternative: A. Hakimi (Inter Milan) is also very good, but has the "Full-back Finisher" playing style, which I'm not a fan. 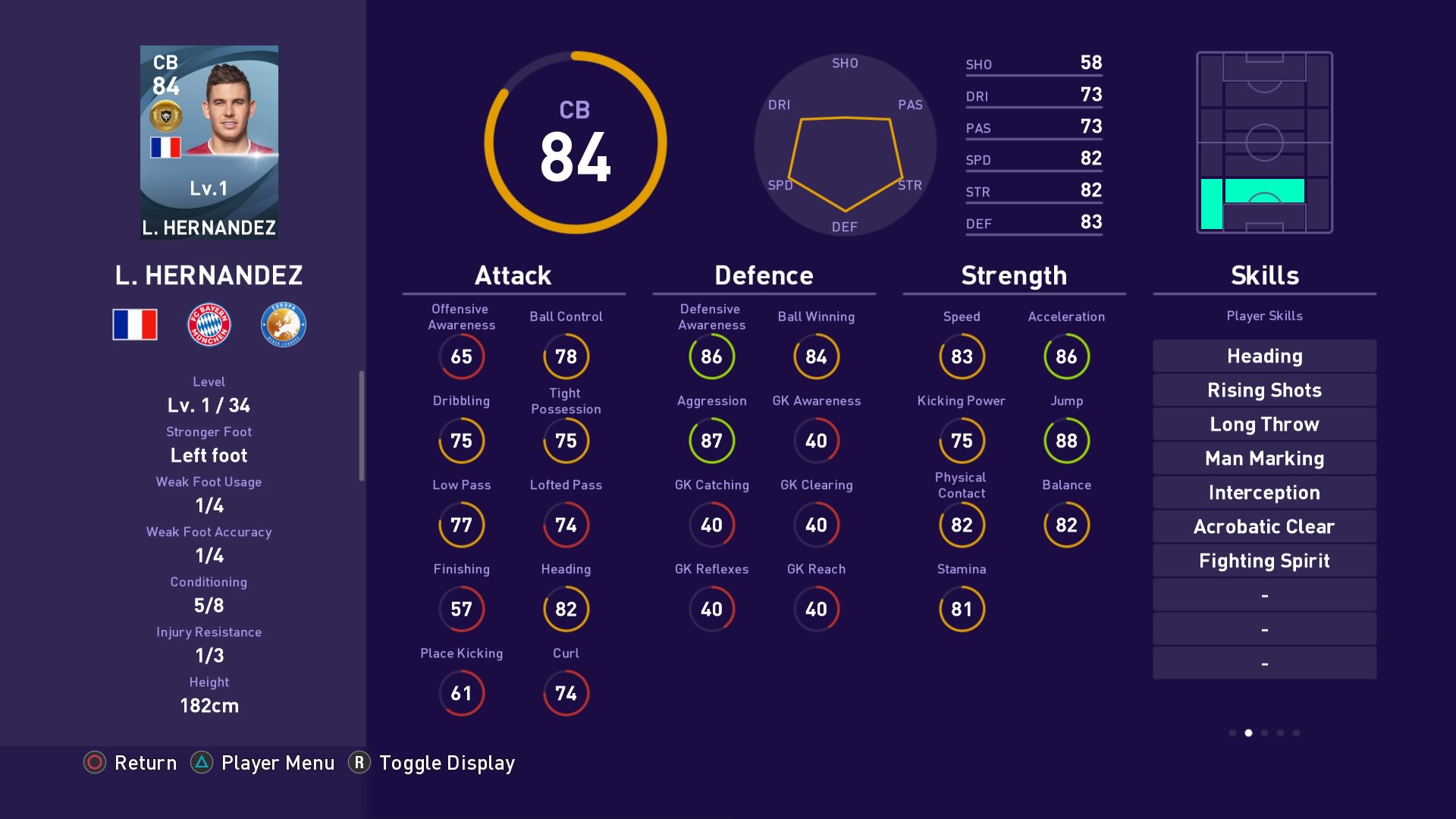 A very quick, competent defender who can also play as a LB and shows some good overall physical/jumping stats.

You can scout him with free scouts (25% chance) by combining Other (Europe) / Jump / Left Foot.

Alternative: J. Gomez (Liverpool) is just as good and can play as a RB as well. He was one of my favorite defenders last year, when he had the "Defensive Full-back" playing style (now "Build Up"). 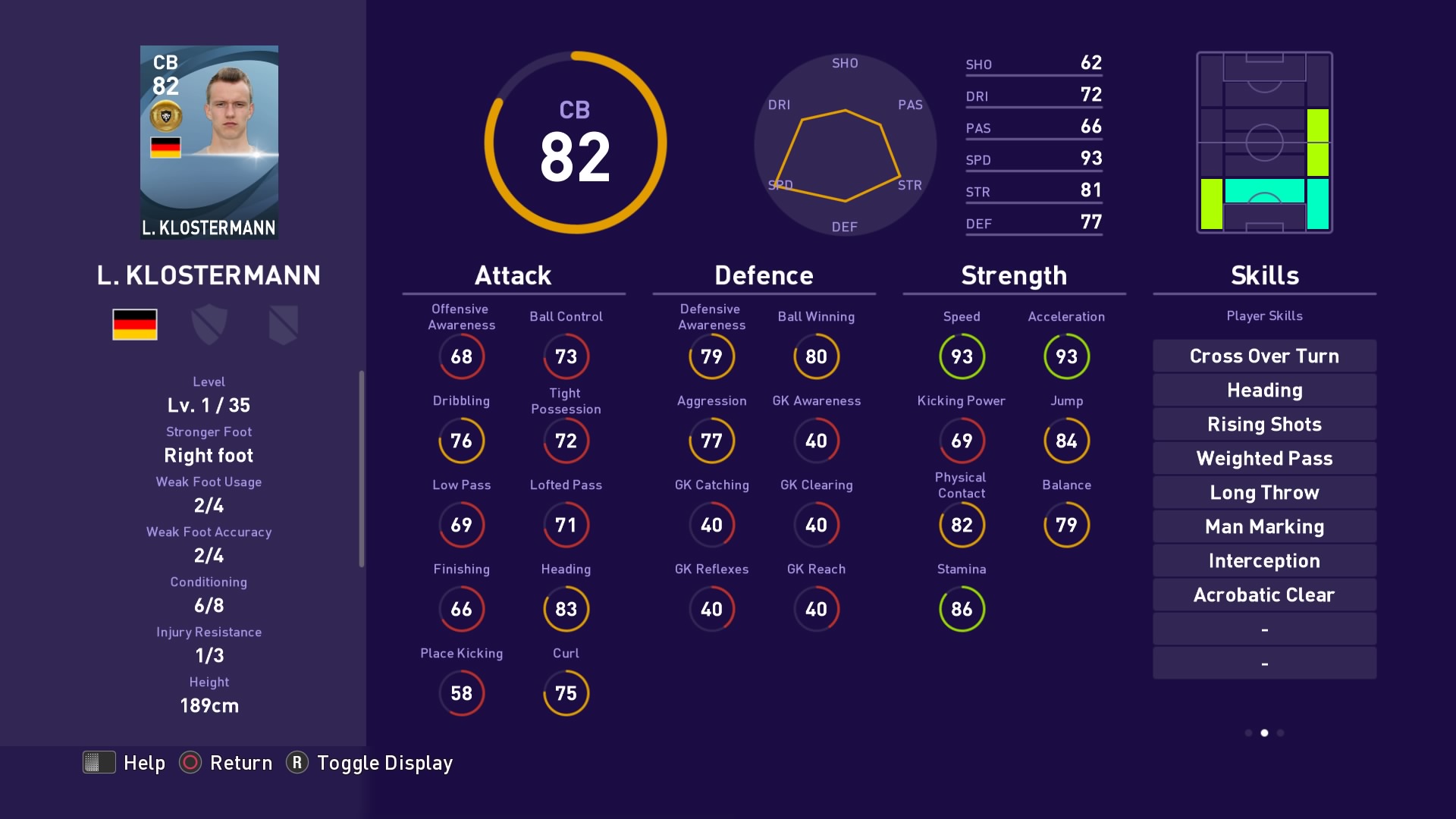 Klostermann has ridiculous speed for a defender, and while he is a CB in the game, you should consider playing him has a RB - his playing style as a CB turns me off a bit.

His Jump and Stamina attributes also set him apart. The best part is that you can scout him for free with 100% chance - simply combine Free Agent / Speed / CB to get him. 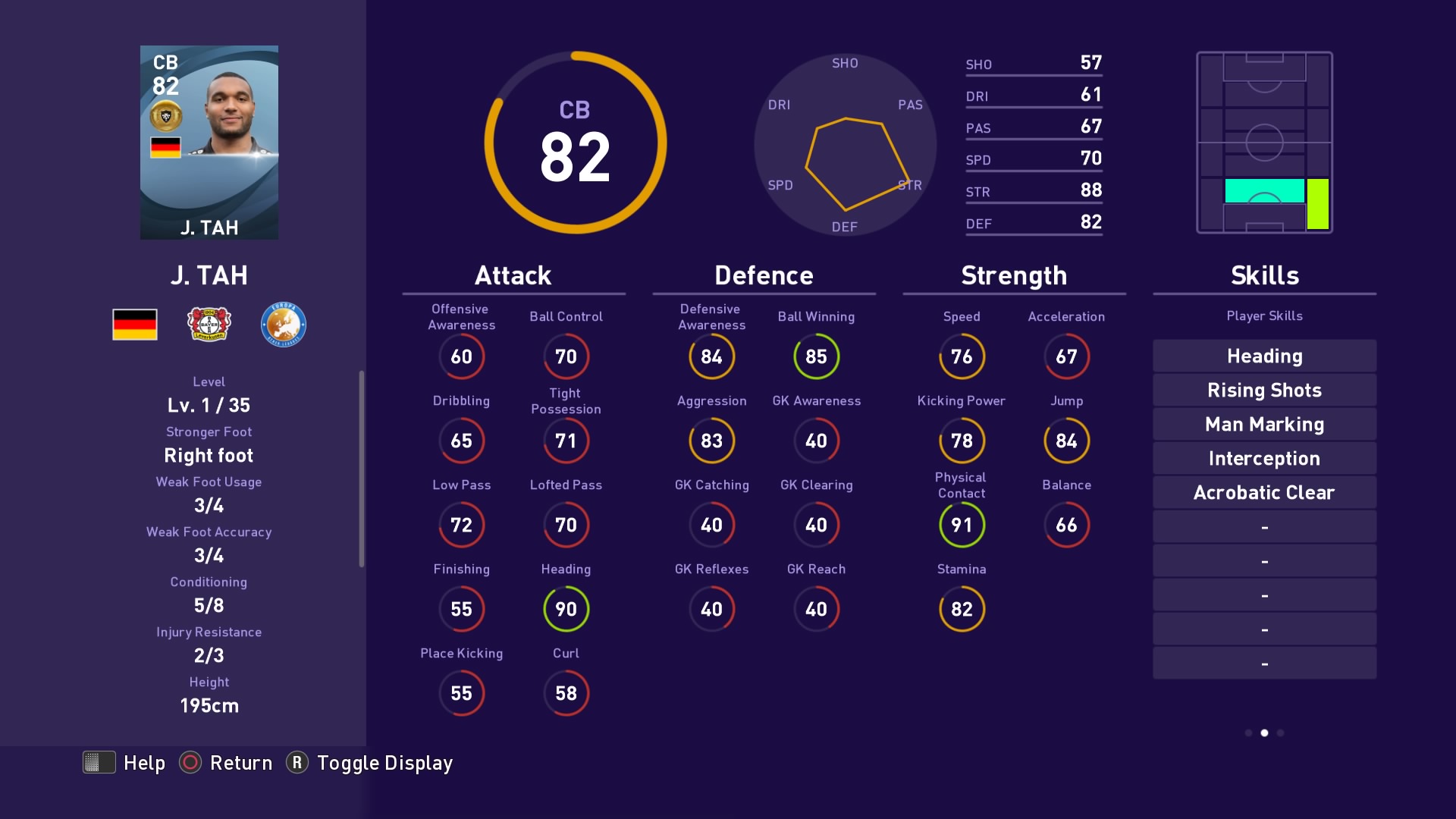 I recommended Tah last year, and he still looks like a great choice when you're facing strong, dominant forwards like Lukaku or Dzyuba. A solid alternative to Virgil van Dijk.

This young German CB is a very tall, physical defender with decent pace and a good weak foot to build up from the back. Just don't use him as a RB!

Alternatives: have a look at Davinson Sanchez (Tottenham) or P.Kimpembe (PSG). 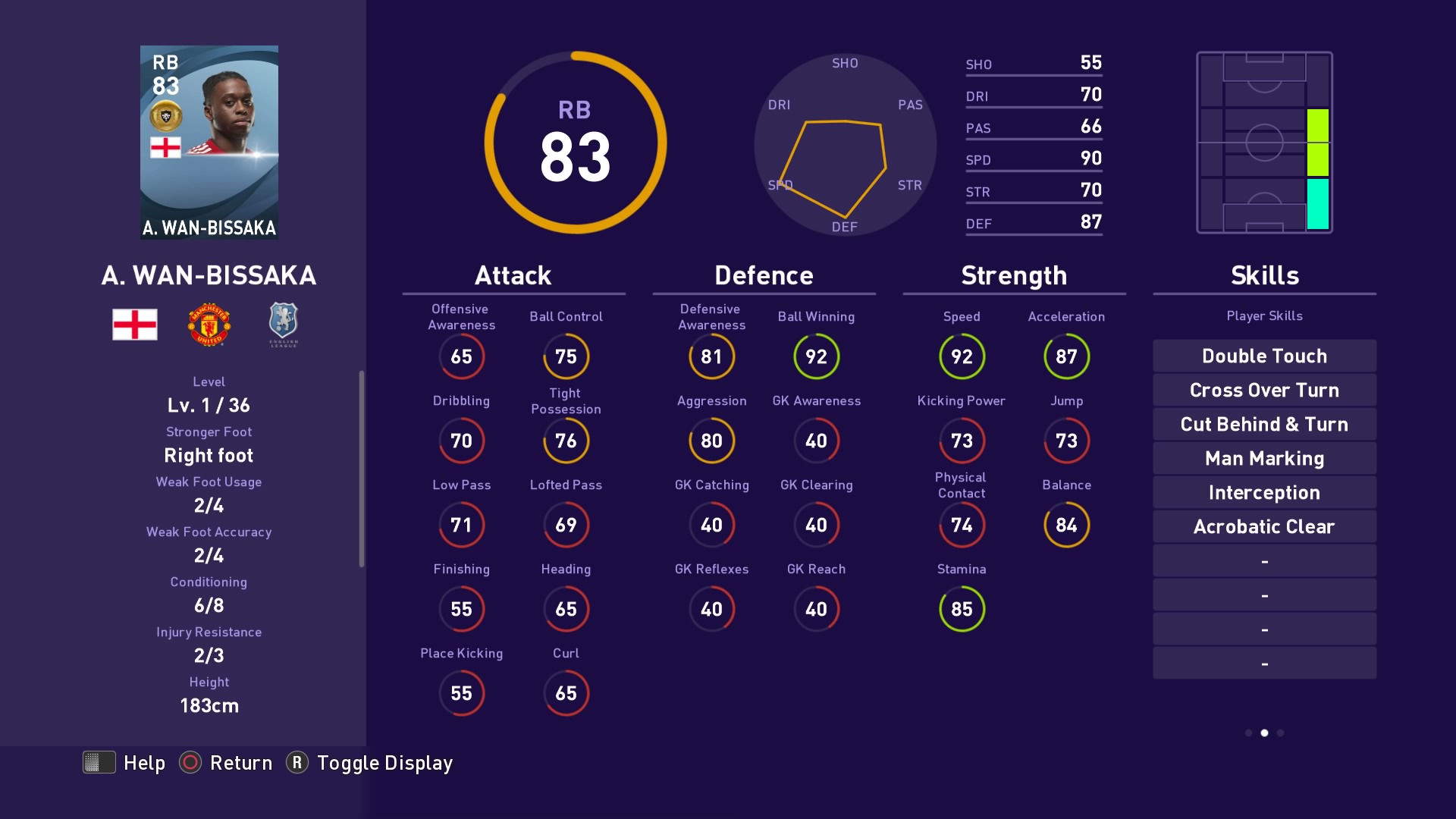 One of my favorite defenders last year got even better, simply because he is now a Defensive Full-back (my favorite playing style for Full-backs).

Bissaka has decent conditioning (6/8) and all the important attributes for a good defensive full-back: speed, stamina, and ball winning. His "Double Touch" is also a nice-to-have, as I tend to use that dribble skill when I'm close to the line. 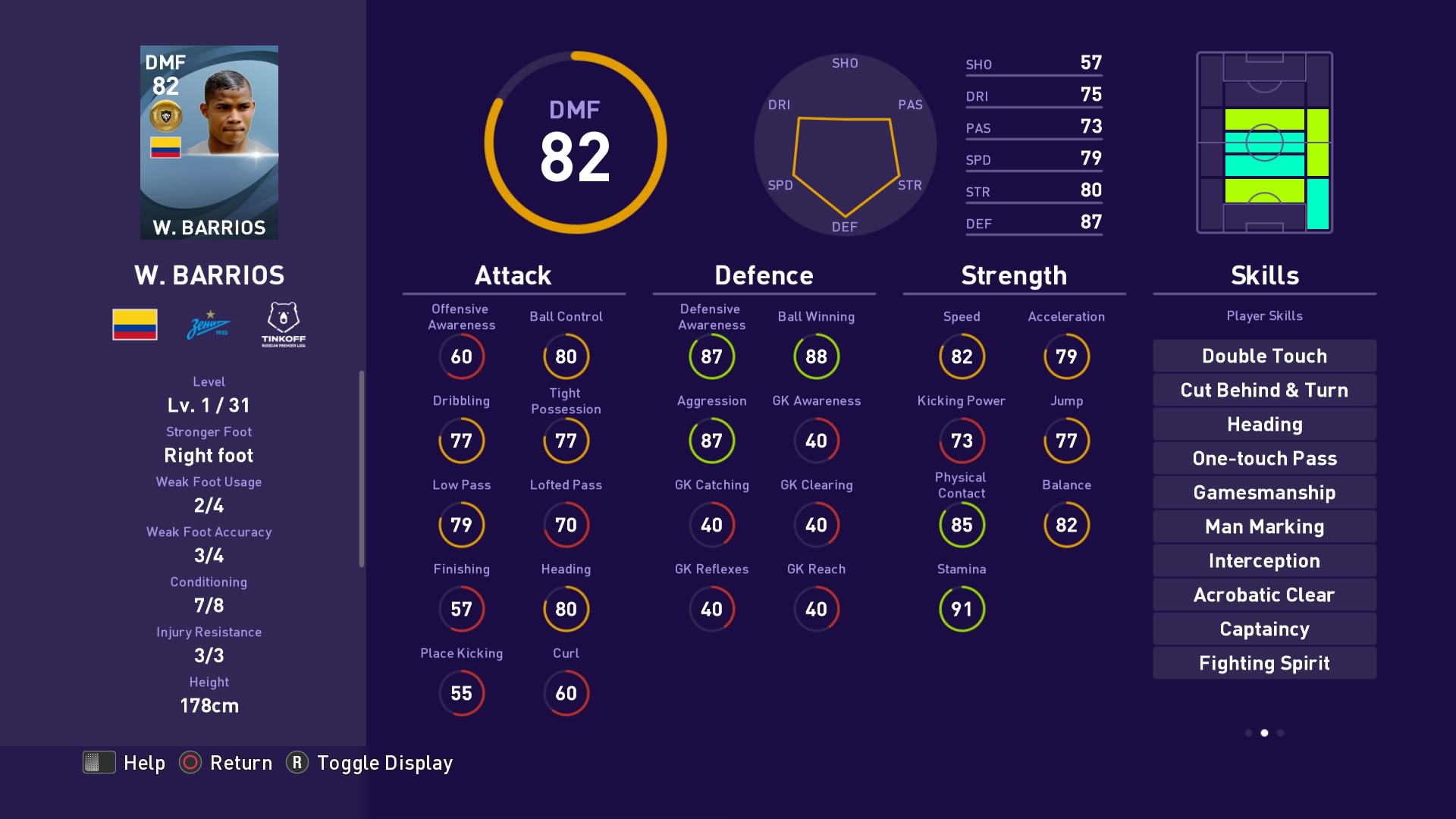 Barrios is a popular option for PES veterans, as he seems to tick all boxes when it comes to the important attributes you seek for a DMF - an Anchor Man with great physical/aggression stats, who excels in Ball Winning and Stamina.

His Condition (7/8) will ensure he can be used on most games.

In the game, he is often seen as the cheap Patrick Vieira. You can scout him with free scouts (50% chance) by combining Russia, N/S American or Defensive Awareness and DMF.

Alternative: have a look at D. Zakaria, who is a Free Agent. 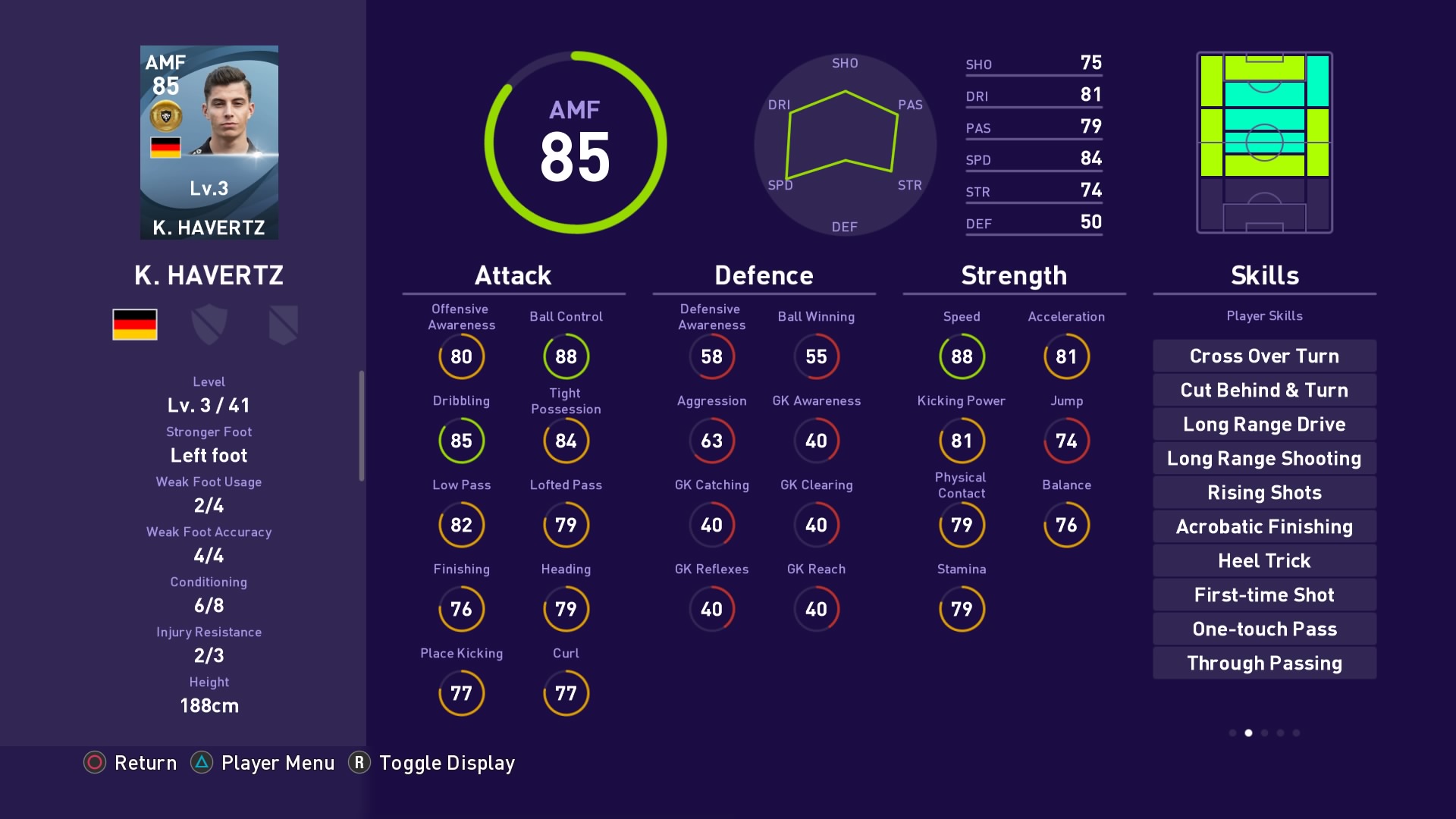 A promising young player who is now in the Premier League, Havertz has great Speed, Ball Control, and Dribbling attributes, making him a great choice for the important AMF role.

His combination of good weak foot and skills ensure he will be great at both shooting (Long Range Shooting, Rising Shots, First-time Shot, Long Range Drive) and passing (One-touch Pass, Through Passing).

Alternative: M. Ødegaard (Real Madrid) deserves a mention - he actually has better dribbling and form, but I prefer Hole Players to Creative Playmakers in this position. 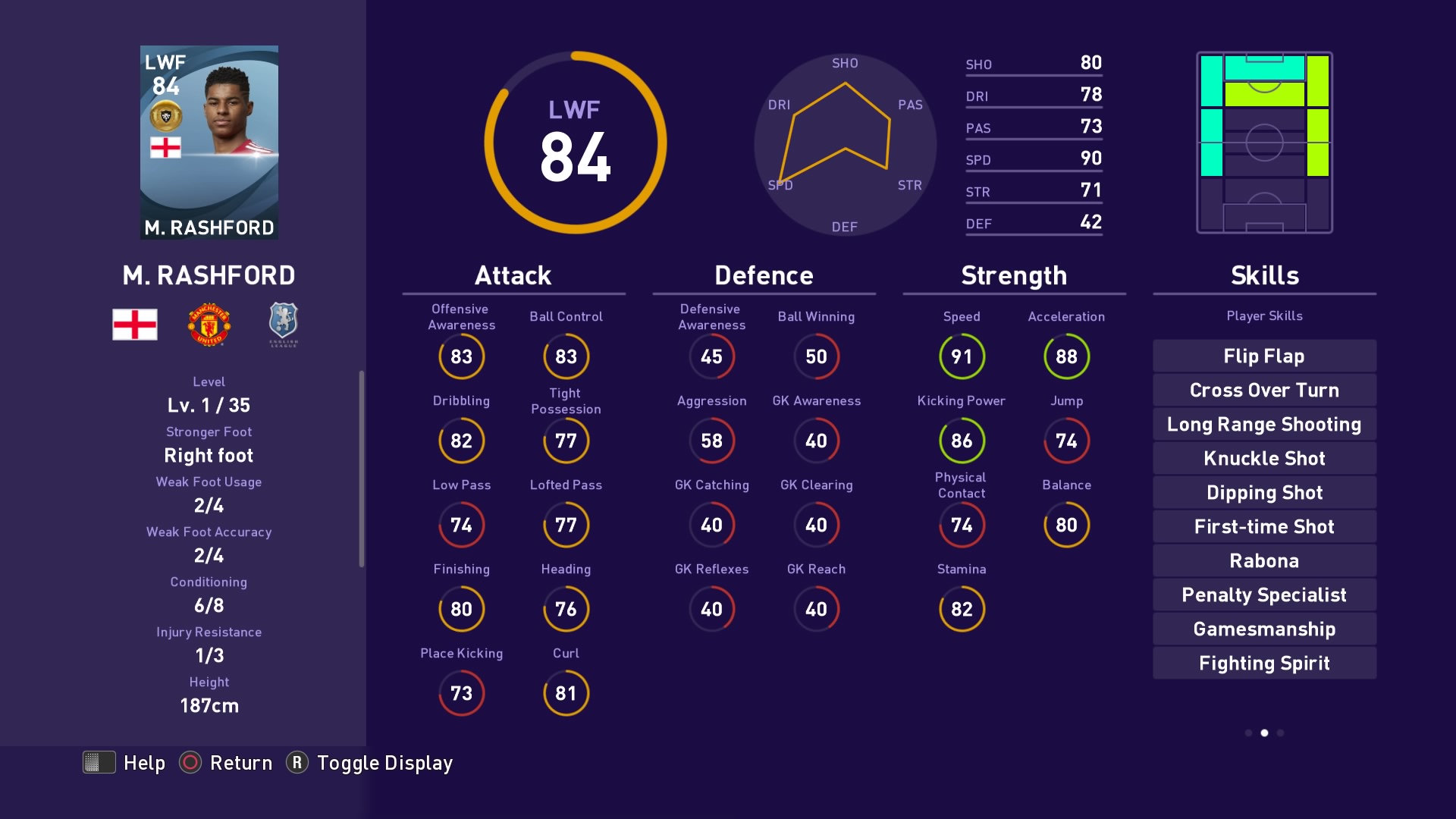 Rashford is one of my favorite players in real life, and won many games for me last year (breaking some ankles in the process).

I always use Rashford on the wing. He has great Offensive Awareness, an important stat that sets him apart from most wingers. With his speed, he often appears in the right position to run towards goal on a counter.

You can get Rashford with free scouts (100% chance) if you combine English League / LWF / Offensive Awareness.

Alternatives: Kingsley Coman (FC Bayern Munich) has amazing speed and the "Super-sub" skill, making him a good option when coming off the bench.

Richarlison (Everton) is another option worth noting. He lacks Offensive Awareness, but can play as both CF and on the wing, has a good weak foot and a decent set of skills. 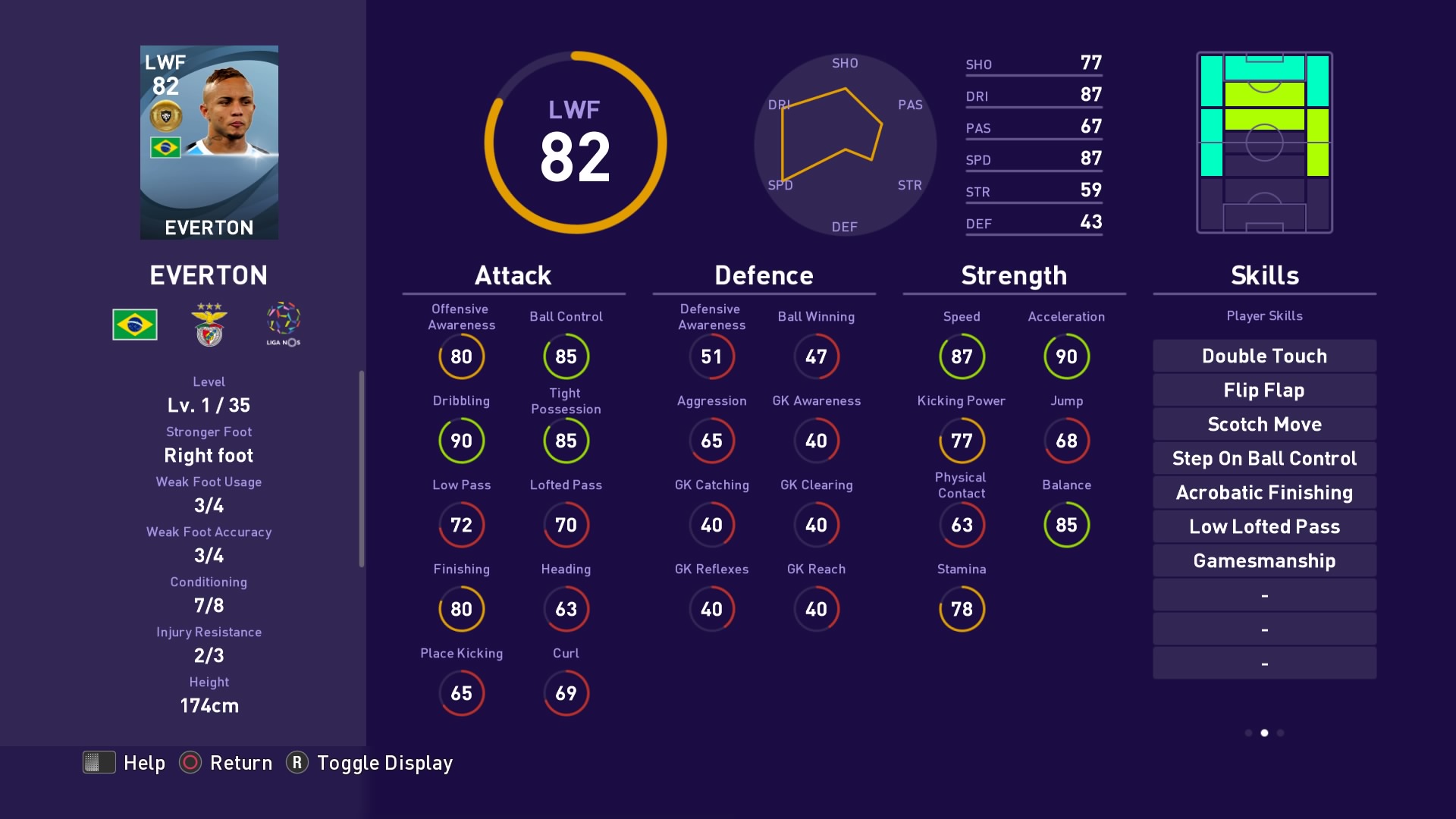 A very underrated player, who was also a star in the game last year. Now in the Portuguese League, Everton will certainly make an impact and will probably reach "A" or "B" status in the weekly Live Condition ratings plenty of times.

Everton has great Speed and Dribbling stats, the 2 best dribbling skills for me (Double Touch and Flip Flap) and the all important 7/8 Conditioning - making him a very consistent winger to have.

Alternative: have a look at Rodrygo (Real Madrid), who has been a great option over the past couple of years (same Playing Style as Everton). At 19 years old, he still has a lot of potential and can reach 94 when fully trained. 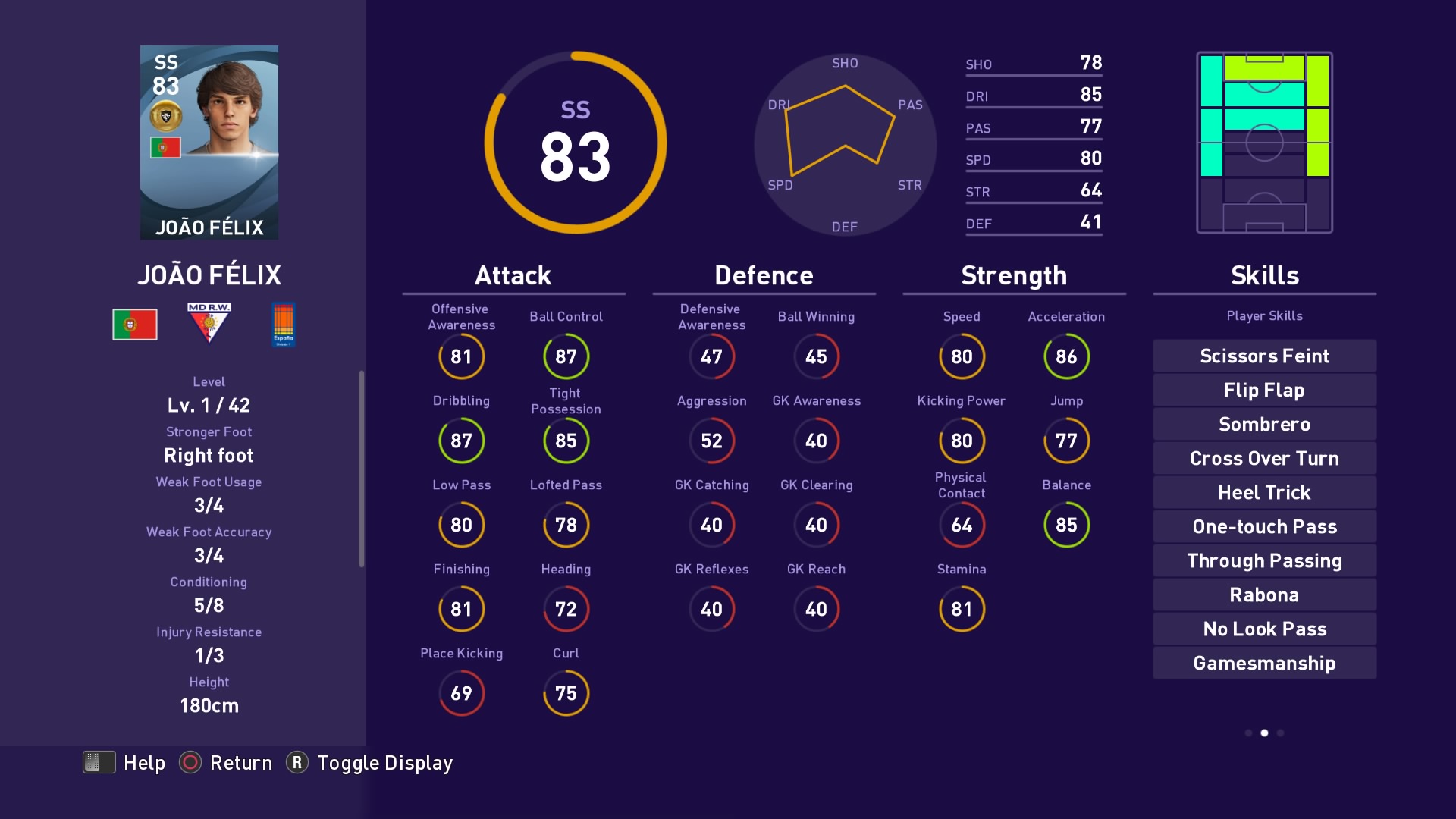 Portugal's golden boy is still adapting to the Spanish League, but in the game he is one of the most promising players, at just 20 years of age and 42 levels to train.

João Félix should be used as a "SS" or "AMF" in your team. He's better at dribbling and passing than shooting, so I prefer using him in the midfield.

This trickster has pretty much every feint you can think of, and the "Gamesmanship" skill means he will win many fouls if he loses the ball (which can be infuriating when facing him). 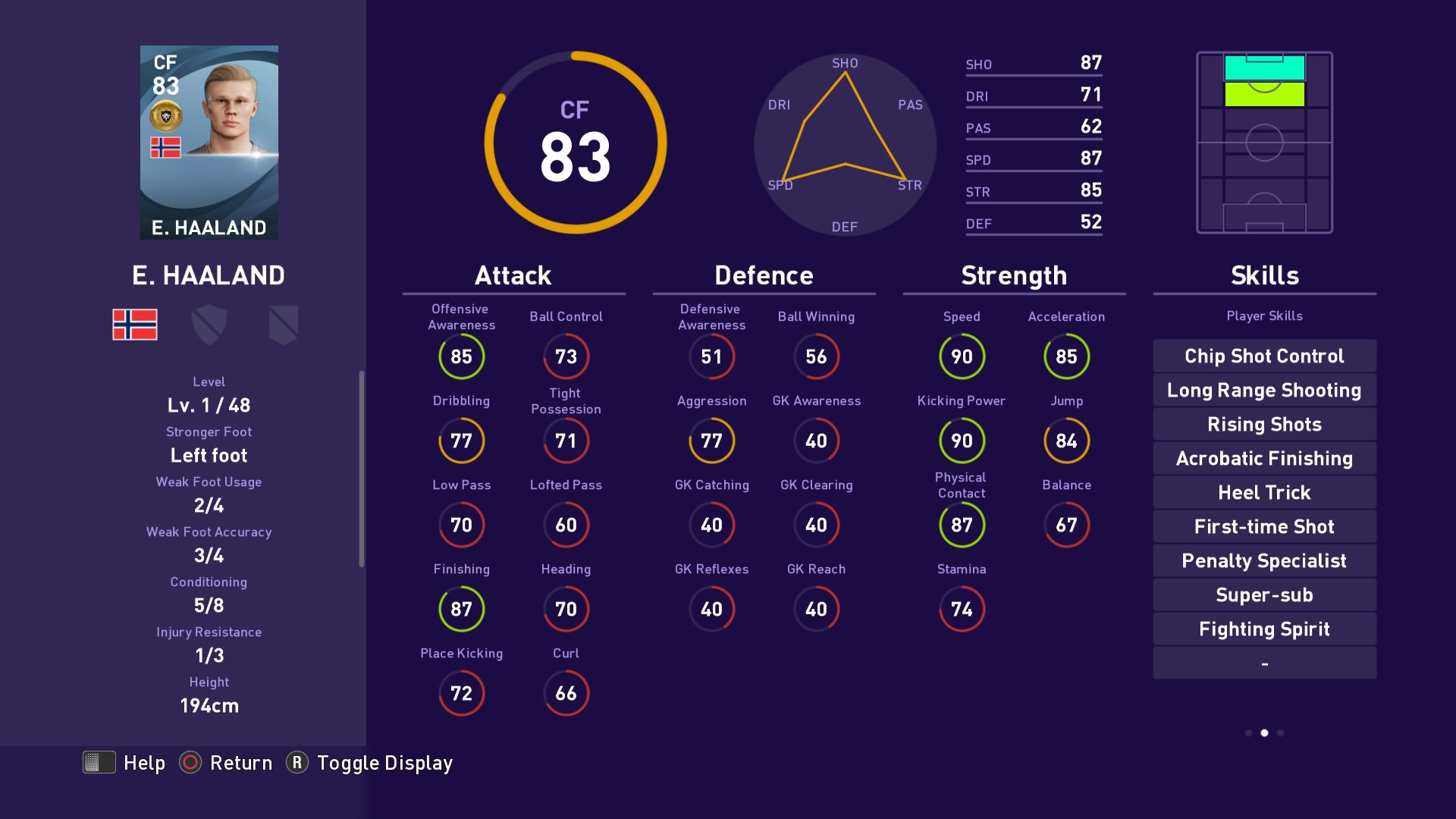 This young sensation is one of the best CFs in the game, and the sole responsible for the insane price for the 4* Norway scout in the Auctions House (Borussia Dortmund is not in the game, but you can get him as a Free Agent).

If you look at the stats, he is the perfect forward. If you could build a striker from the ground up, it would look like Erling Haaland: Speed, Kicking Power, Physical attributes and good Finishing.

He also has some great Player Skills, like "Super-sub", "First-time shot" or "Chip Shot Control". What's not to like?

Haaland scores a lot, so you will probably find him featured with "A" or "B" status in the weekly Live Condition ratings plenty of times.