Finding the perfect manager is always one of the most exciting tasks in each edition of PES. You may start with a formation in mind, but suddenly you get a good player that forces you to change tactics so that you can use him. When things finally click, it's pretty satisfying!

This year, Konami rewarded early adopters with plenty of superstar players from the beginning, so I found it less challenging to pick a formation that fits my style. Counter-attacking still feels overpowered, just like last year, but I'm a fan of possession-based football, so I will offer you some good suggestions for both styles.

This is simply my personal opinion, so make sure you keep trying out different formations/tactics if you're not happy. Have a look at my full Manager List for PES 2021 for inspiration.

As a reminder, have a look at all the Advanced Instructions you can use, as well as all the Playing Styles players can have for better comprehension.

If you're looking for the best managers in PES 2020, go here. 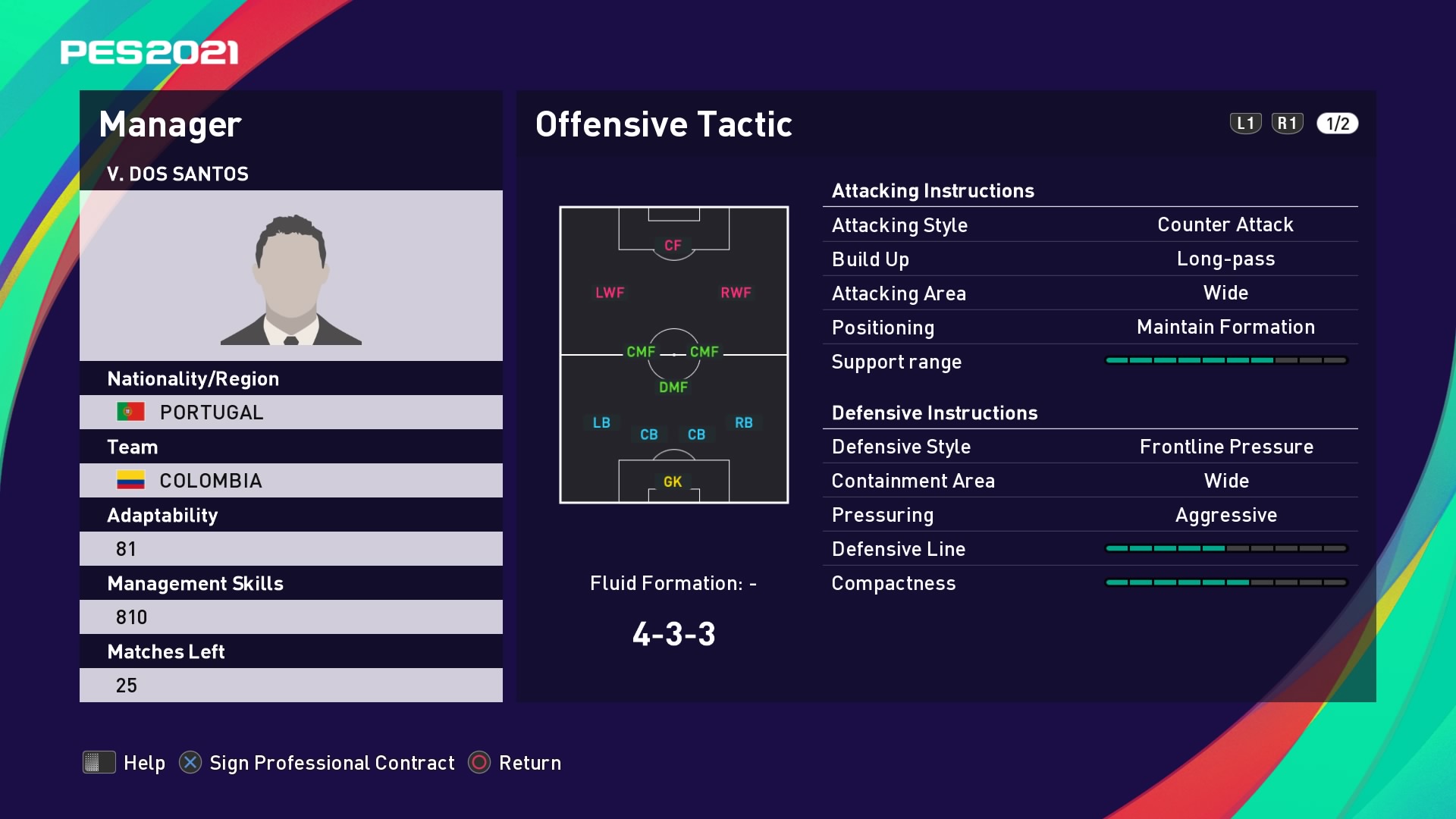 If you're looking for the classic "4-3-3" formation that many PES fans love, you will find dozens of options in my Manager List. This is just one suggestion, but most will share the same philosophy, just different "Support Range", "Defensive Line", and "Compactness" numbers.

In this formation, picking the right players for the midfield is key. After a lot of experimenting, I feel like the best option is to have 2 physical Box-to-Box CMFs (with good stamina), along with a DMF with the "Anchor Man" playing style.

While attacking, players will be well spread out in the field, so you can go for long balls to set up counter attacks, preferably to the wingers. You can then serve your striker to finish things off.

Without the ball, I usually prefer to go for the "Deep Defensive Line" instruction, so that my defense drops deeper, and I use defensive full-backs to have many players in my own box.

This is a very balanced formation and should be one of the first to try out when you're new to the game, as it provides a lot of flexibility.

This is such a popular option that you will find similar offerings in the database at any given time, for both "Possession" and "Counter Attack" attacking styles.

Here are some other 4-3-3 managers for you to consider: 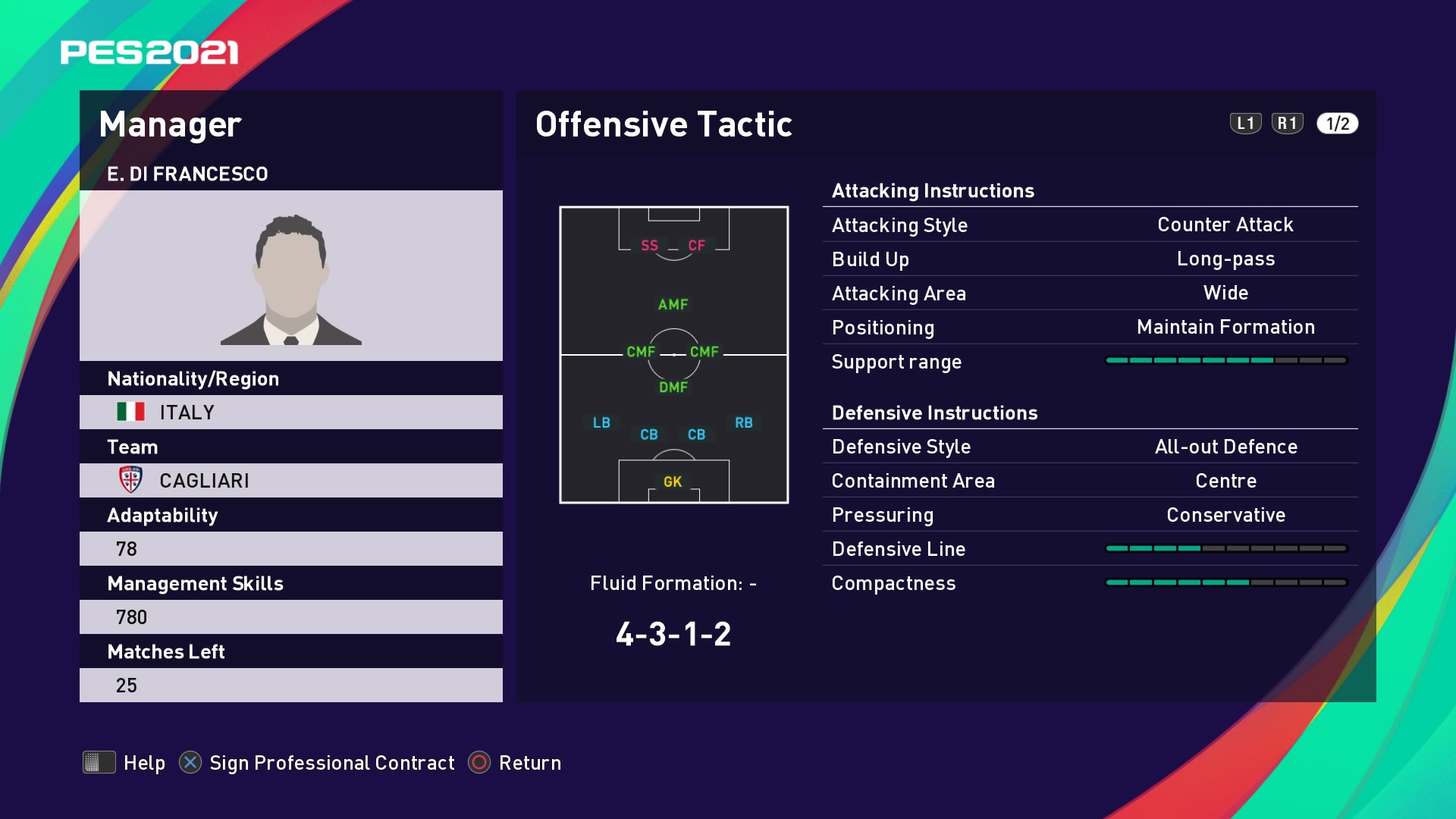 Fernando Santos was one of the most popular managers last year until Konami decided to drastically change most of his instructions. If you're looking for an alternative for 2021, there are some good managers to keep in mind. E. Di Francesco is one of them.

This formation lacks wingers, so your best bet is to attack through the middle. You can go for short or long passes, as you will find your players well spread out in the pitch.

If you have an AMF with good passing skills, you can quickly create chances on the counter with long passes to your 2 strikers. Then, you can also go for 1-2s between them.

His defensive line isn't that high, so you shouldn't be as vulnerable to counters as other similar formations.

If you can't find Di Francesco in the database at the time, try to look for other Italian managers with the same formation - I noticed they share plenty of the same specs.

Here are some worthy alternatives: 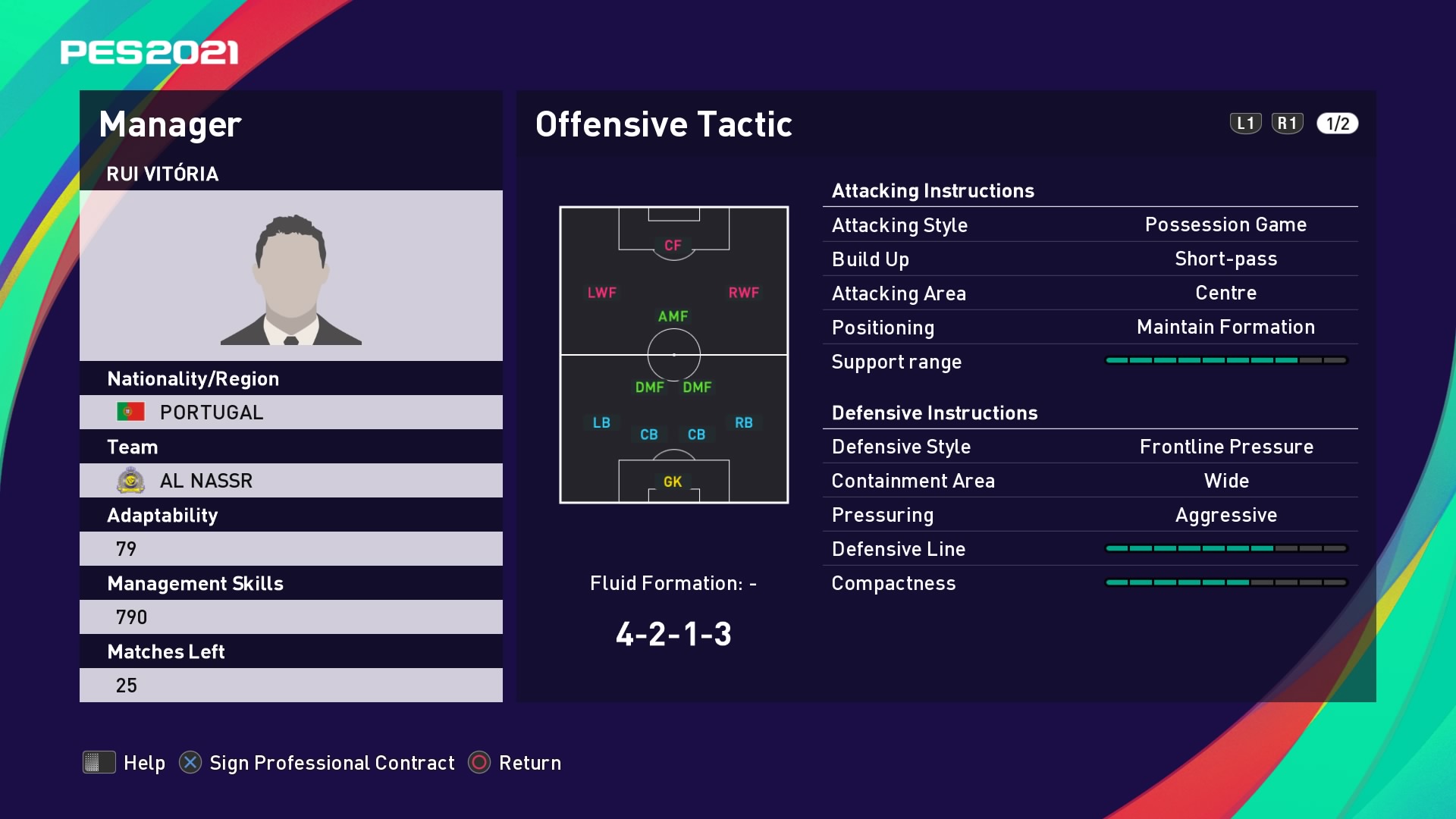 Niko Kovač was one of my favorite managers last year, so I waited for a while until I found the perfect replacement. This is it: if you enjoyed Kovač, Rui Vitória is a formidable successor and a great fit for fans of possession-based football.

I like to use pacey wingers (both Roaming Flank or Prolific Wingers will do) and a strong Centre Forward to hold the ball and pass to them. This is not a good formation for fans of 1-2s, although you can go for an AMF with the "Hole Player" playing style to have more options close to goal.

In the midfield, I switch one of the DMFs to a CMF that can work as an Orchestrator or Box-to-Box, and keep the other as a defensive-minded midfielder that can play as an Anchor Man. Otherwise, you may feel that this team is lacking numbers on the defense, when you're out of possession.

The defensive line is set quite high, so I usually use the "Deep Defensive Line" advanced instruction with this manager, unless I find a big gap between my defenders and the opposition's attack.

Just like last year, I prefer to use 2 full-backs with the "Defensive Full-back" playing style, or apply the "Defensive" advanced instruction to at least one of them.

You probably won't find Rui Vitória available very often, so here are some managers that share most of his traits: 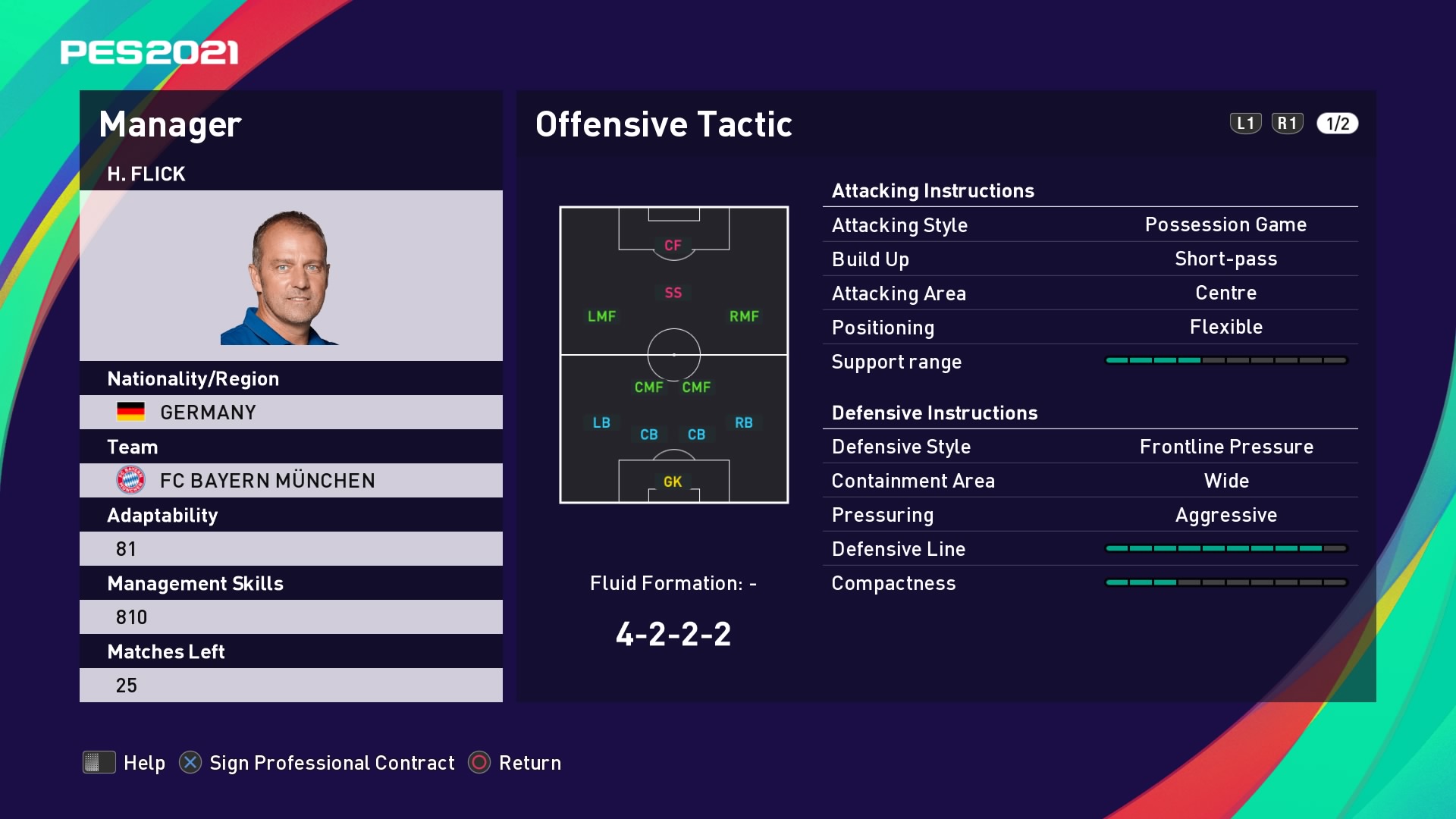 Hans-Dieter Flick won everything with his superb Bayern side last year, and if you're looking for a very solid team that constantly chokes the opposition with his high defensive line, this may be the right manager for you.

Defensively, I noticed I did not concede many scoring chances per game. The centre is pretty crowded with 2 CMFs/DMFs, and if you notice your opponent opts to attack through the flanks, you can use your LMF and RMF as a second line of defense on wide areas.

Offensively, I felt that you won't have that many chances per game (unlike Bayern), as I feel there aren't many attacking players in the last third of the pitch. With Flick, you will have to be clinical when in front of goal.

If you enjoy quick 1-2s in the box, this formation will work. I recommend combining 2 players with different attributes, such as a strong CF with a pacey Second Striker, or a SS with the "Dummy Runner" playing style, like Thomas Müller or Roberto Firmino.

For some reason, I found that many goal-scoring chances arise in the second half when the wingers finally start to appear in front of goal. Make sure you introduce some fresh legs if you realize the opponents' defensive line is starting to get tired, as that can be game-changing for the last 30 minutes.

H. Flick should pop up often, as he is one of the top managers to choose from, but if you're not lucky enough to find his 4-2-2-2 formation, here are some similar solutions: 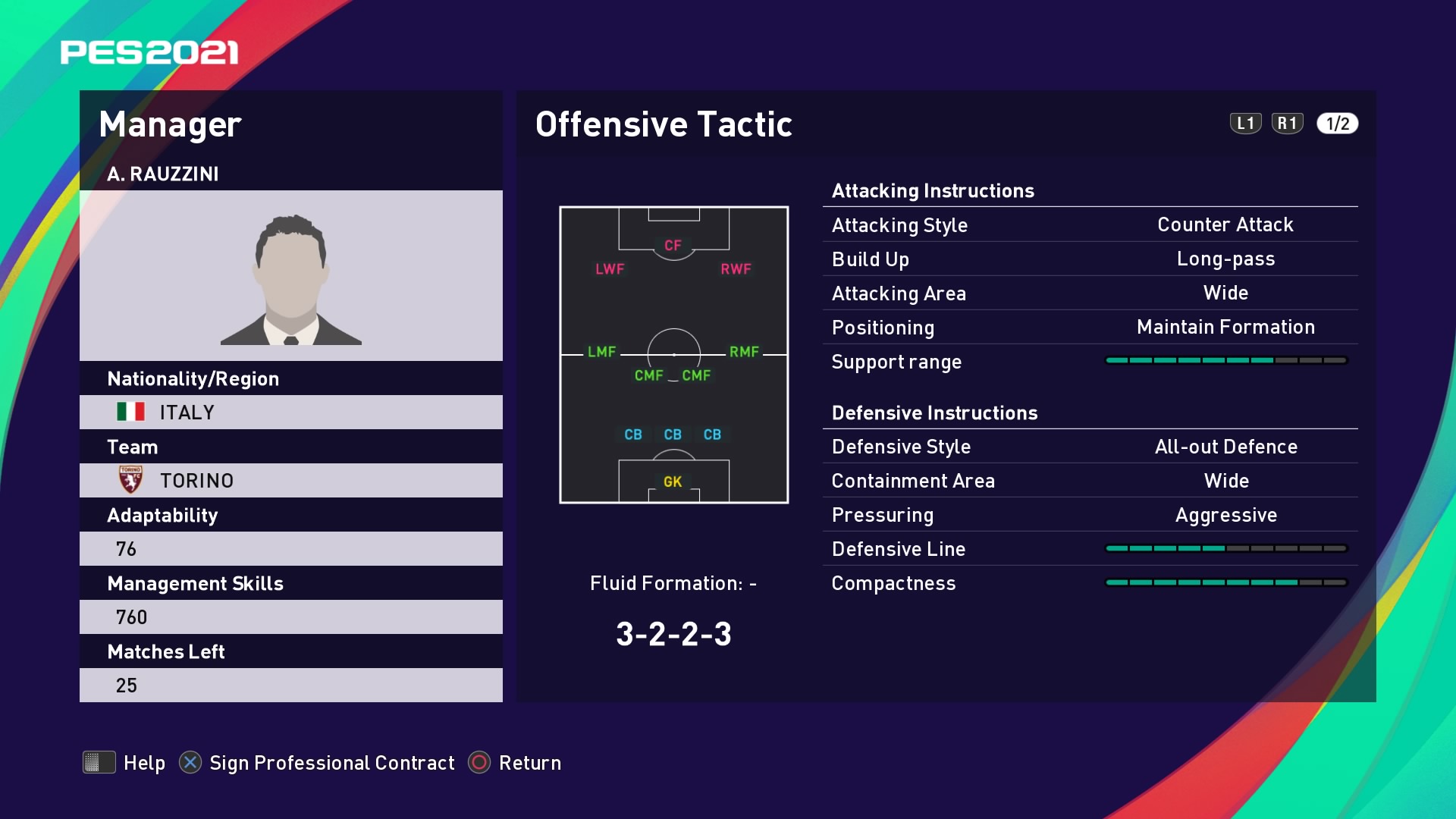 For the fans of 3 at the back, there are plenty of options that you may like.

A. Rauzzini is one of them. 3-2-2-3 is a rather popular formation this year, and I see it as high risk / high reward; you will score many, but you will rarely keep a clean sheet.

While attacking, I suggest using your Centre Forward as the player who holds the ball up front and supplies deadly balls to the 2 Wingers (who should be pacey and ideally with the "Roaming Flank" playing style).

I wouldn't pick very offensive-minded players for the LMF and RMF role, to add some consistency to the midfield, and they should have very good stamina to last all game.

You can switch to 2 DMFs to compensate for the lack of men in the defense, but for most players, I believe that one DMF with the "Anchor" Man playing style will be enough.

Playing with this sort of formation comes with a learning curve, but is a nice breath of fresh air and can be the antidote for many opposing formations as well.

I found many alternatives with a similar 3-2-2-3 formation. Have a look at these: