There are many promising Silver Ball Players in PES 2021 - some can achieve very high ratings when fully trained, sometimes even surpassing Black Ball players. This is especially important when it's time to renew their contracts, and it can be very satisfying to train them.

The best part? You can get many of these players for free by combining Free Scouts.

In my descriptions you will often find me writing about Player Attributes, Player Skills, and Playing Styles, so have a look at those sections should you have any doubts. 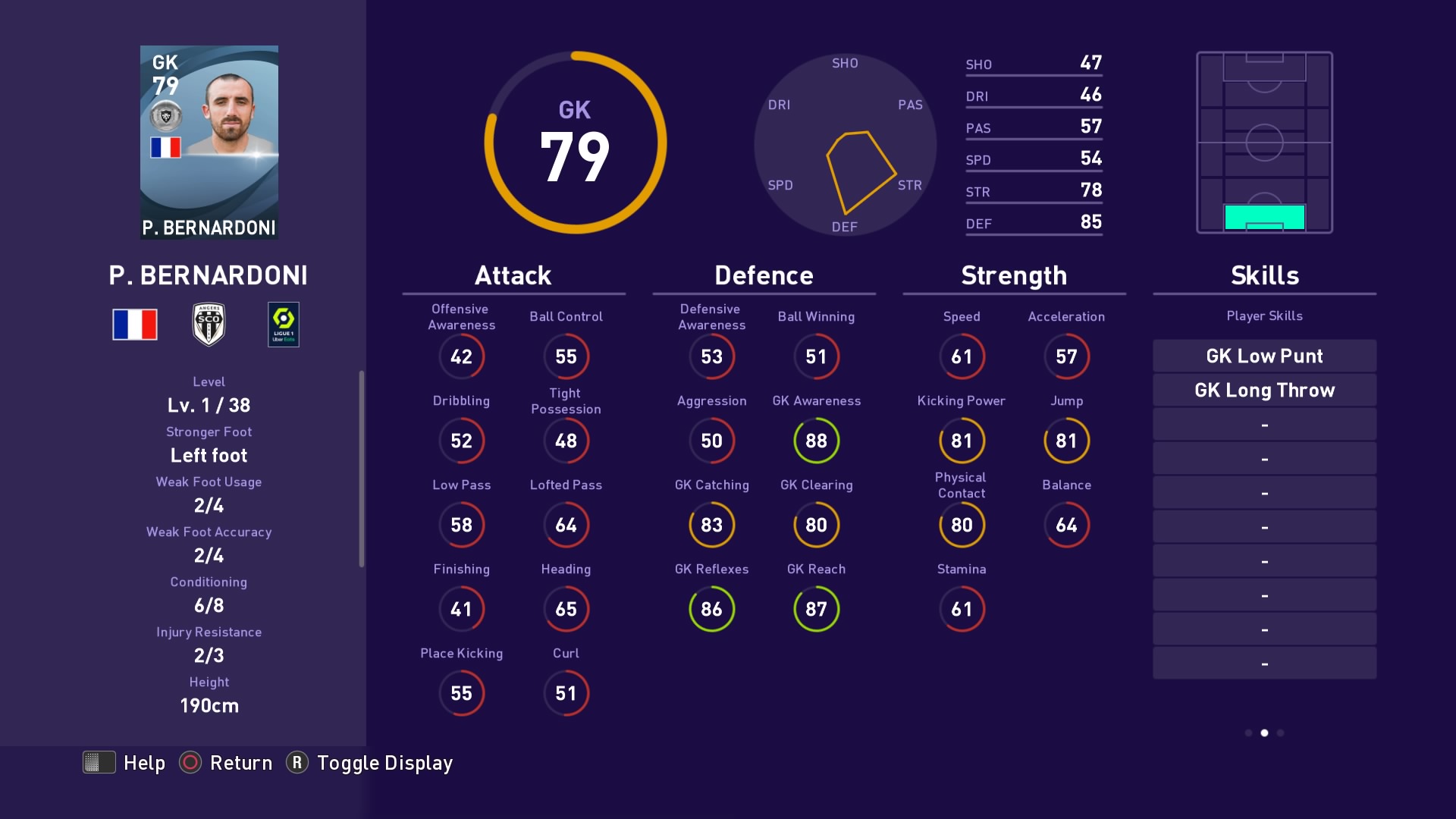 One cool thing about Bernardoni is that you can train him quickly with free scouts - all you need is "French League", " GK Catching", and "Left Foot", averaging 3 stars. 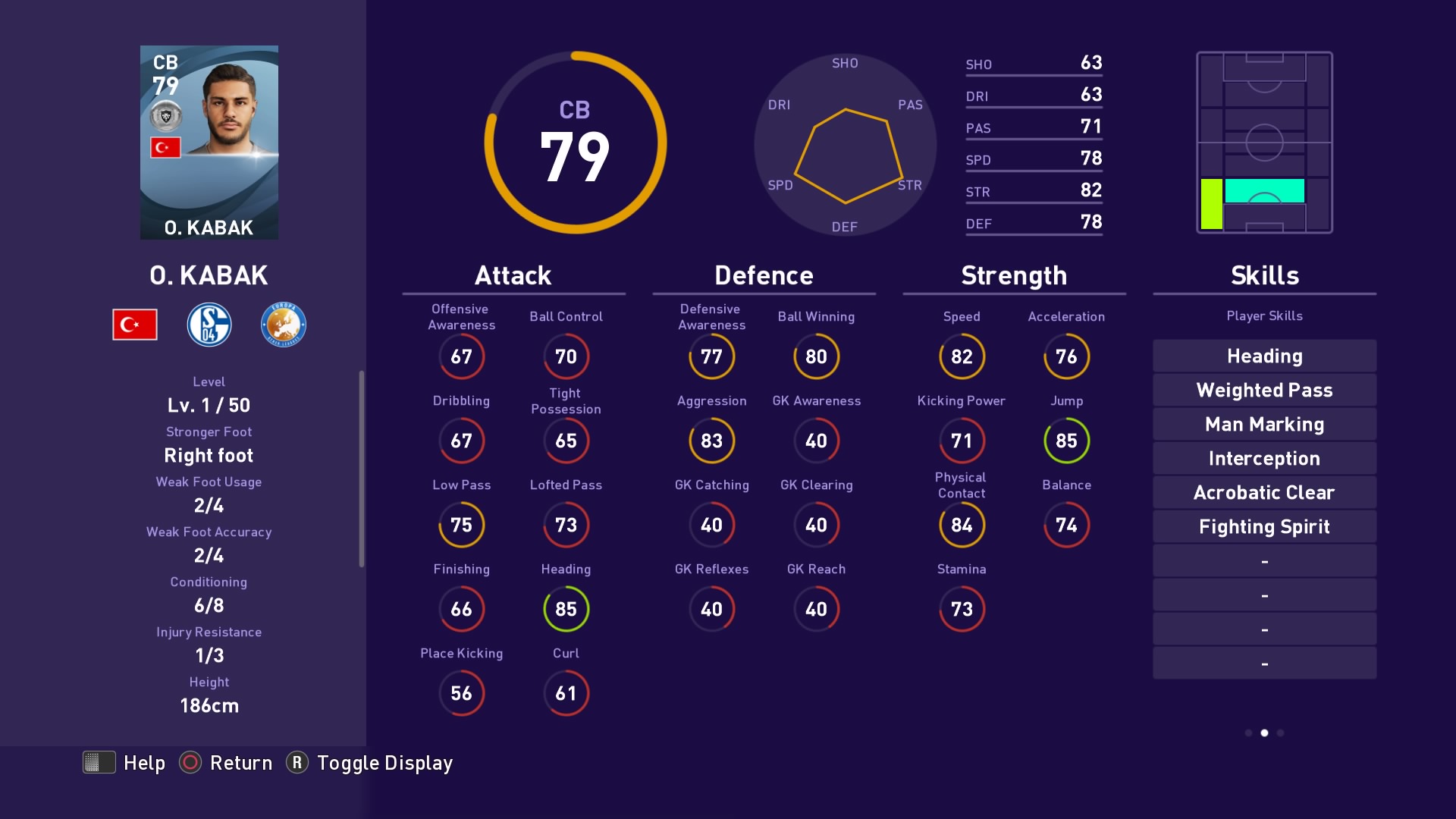 A quick, aggressive defender who excels at physical stats, most notably jumping. Kabak is good at heading and his 6/8 conditioning means he will be willing to play on most games.

Alternative: have a look at M. Demiral (Juventus) - a very promising CB, but that has the "Destroyer" playing style instead. 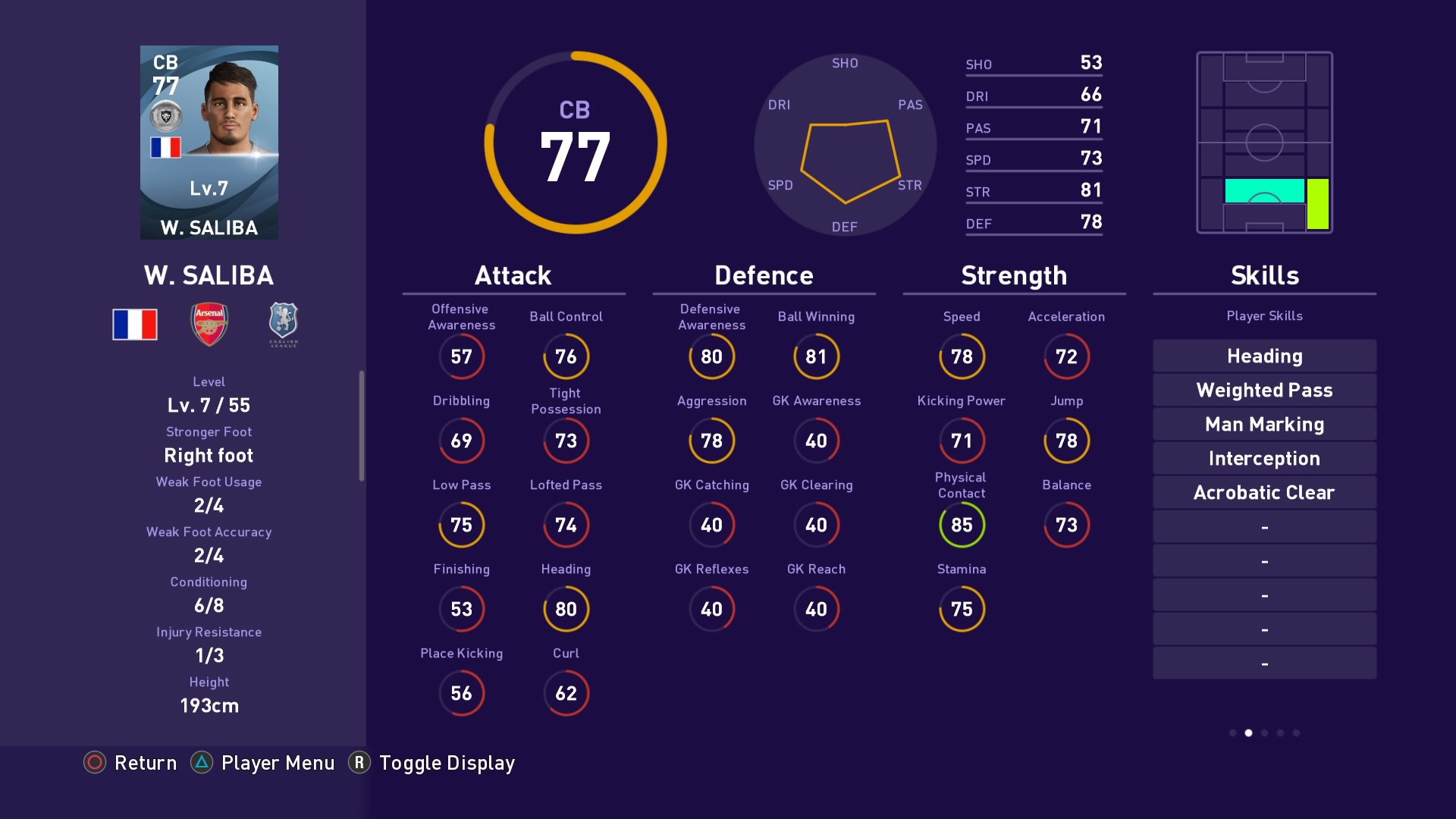 This youngster from Arsenal has some very nice overall defending stats and good conditioning (6/8), just like O. Kabak. They share the same relevant Player Skills. 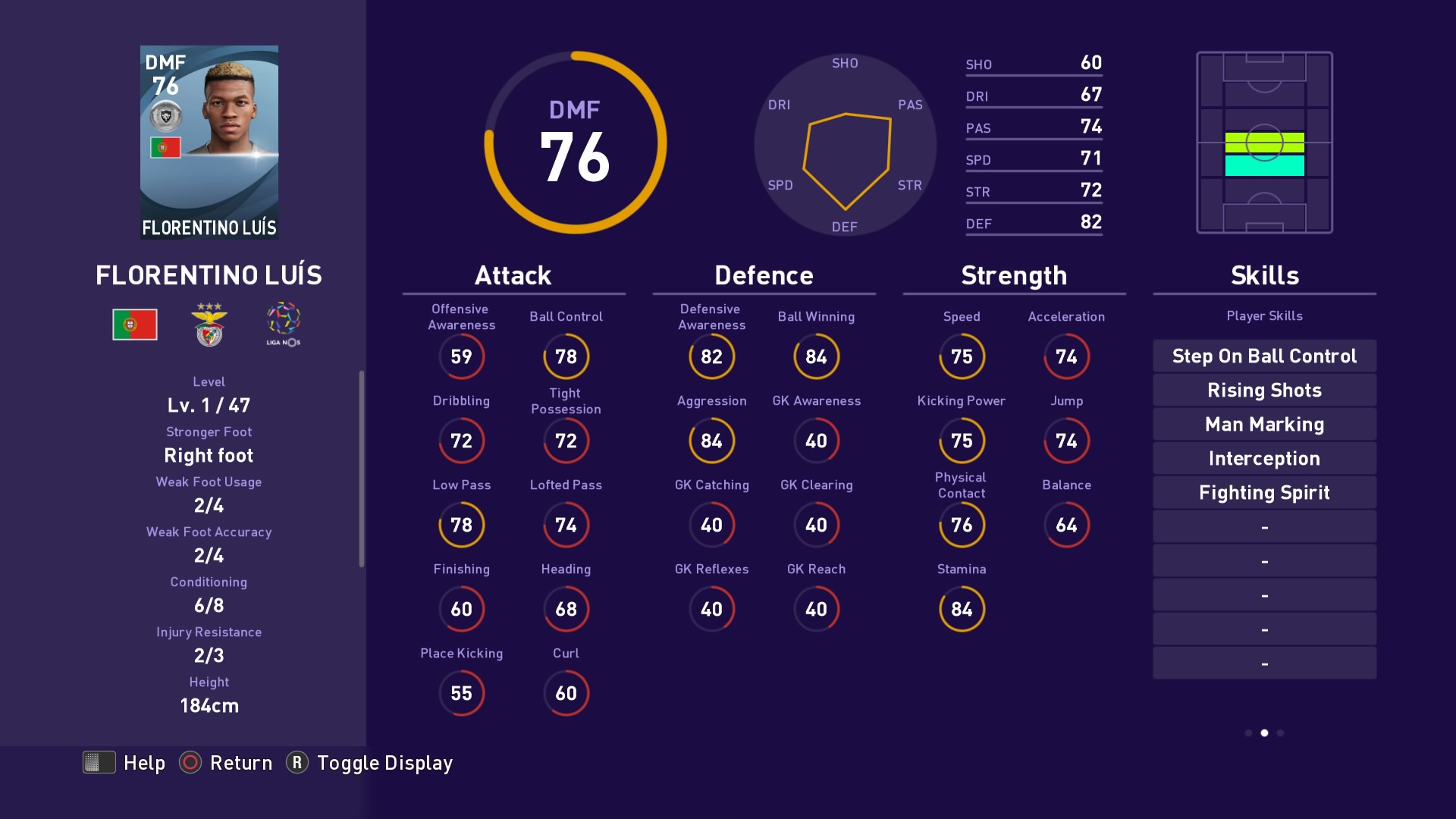 This promising defensive midfielder from Benfica is on his way to Monaco, but until 22/Oct you can get him with 100% certainty by combining the following 3 scouts: "Portuguese League", "DMF" and "Defensive Awareness".

If W. Barrios is often regarded as a poor man's Patrick Vieira, than Florentino is a poor man's Barrios (at least, for now). With some great overall defending/physical stats for an Anchor Man, he is a great option to recover the ball throughout the whole game, since his Stamina won't let you down. 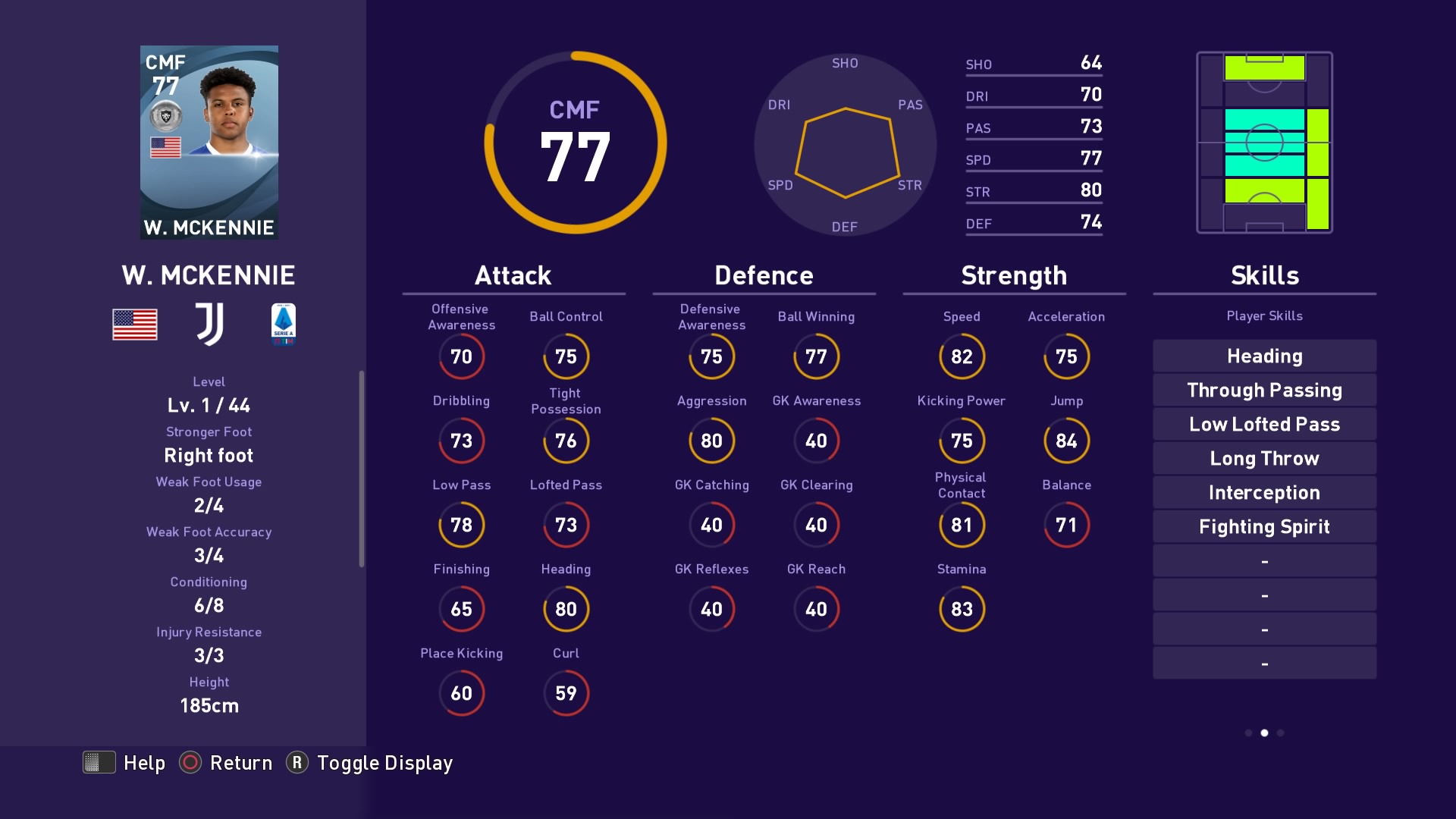 McKennie looks like a very solid option for the midfield. With some great stats overall and the "Fighting Spirit" skill, he will run non-stop, which is what you want for a Box-to-Box Midfielder.

He can play anywhere in the midfield, but his speed and physical stats make him a nice defensive option. Good conditioning (6/8) also ensures you can use him on most games.

Alternative: you should consider E. Camavinga (Rennes) as well. He has some great attributes overall for this position, but his playing style can be a problem (Anchor Man) as he won't go forward often. 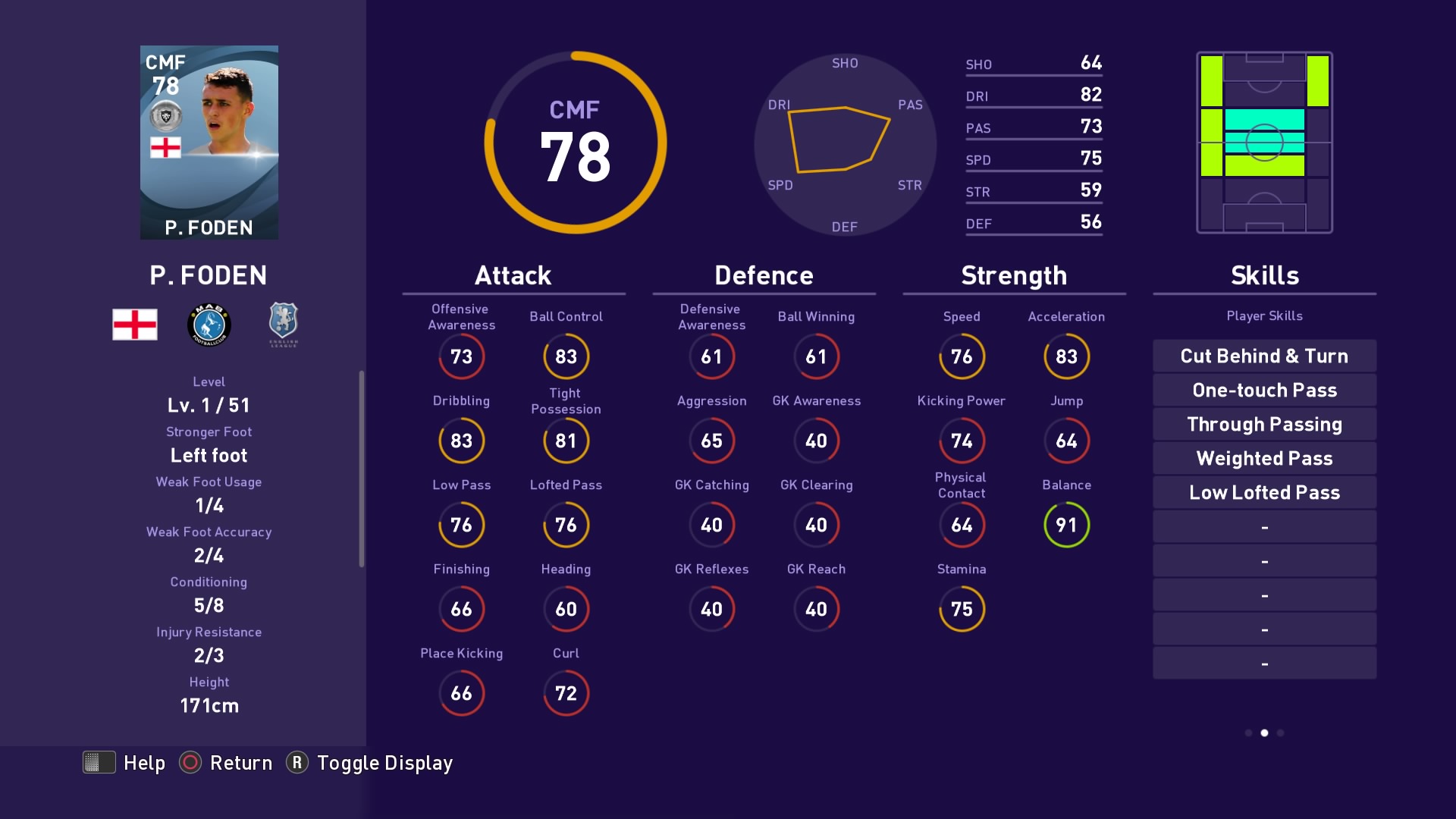 Phil Foden is a talented midfielder to have, especially if you enjoy players with a complete set of passing skills. At 20 years of age, Foden has many levels to keep you busy.

He possesses good dribbling stats, but apart from the "Cut Behind & Turn" skill, don't expect to pull off fancy tricks with him. I feel he is better at passing, so he can be a good solution if you enjoy build-up plays.

Alternative: have a look at D. Kulusevski (Juventus), who can play in the middle or on the wing. 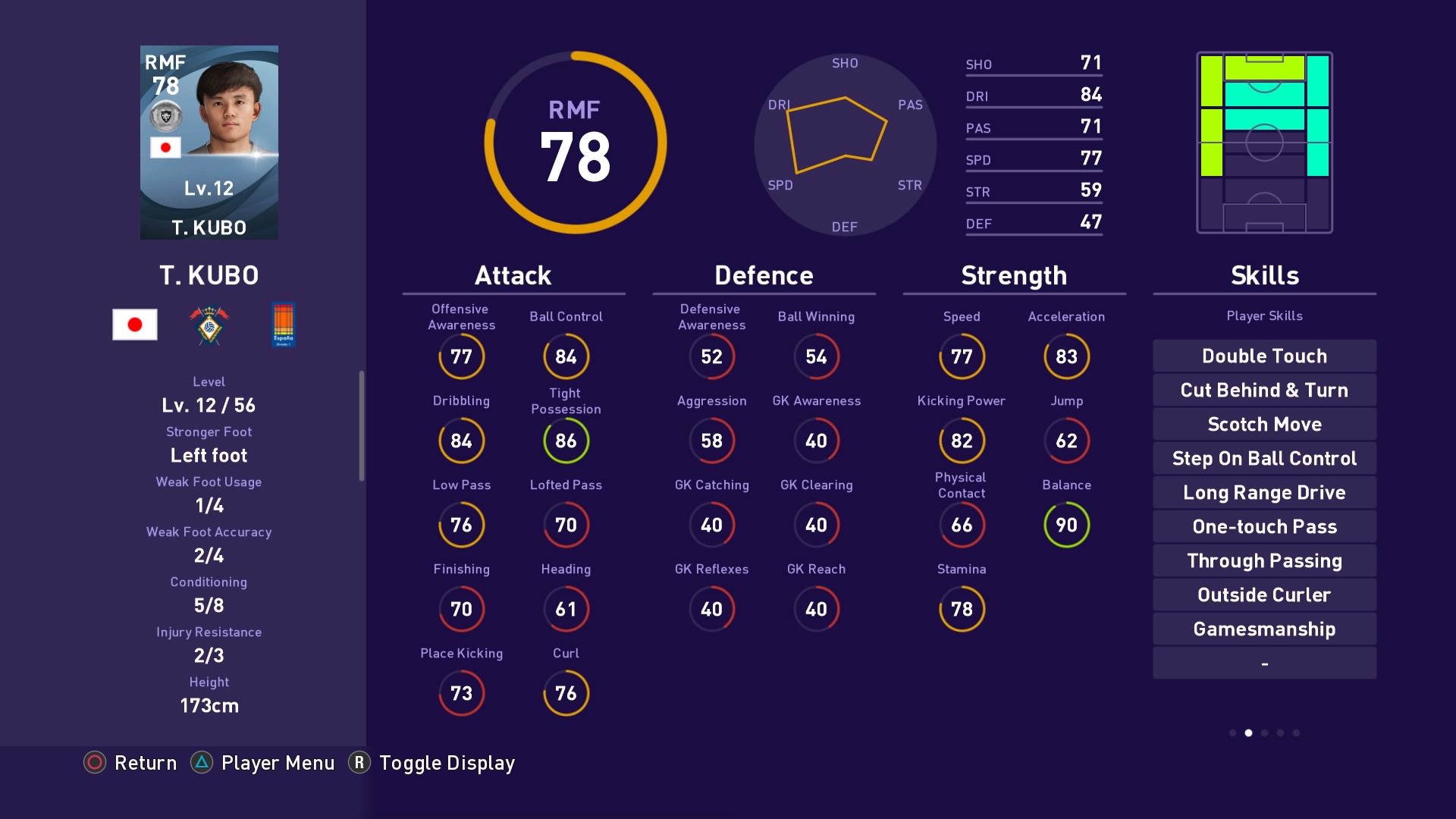 Kubo was one of my favorite bronze balls last year, and in PES 2021 he has been promoted to a Silver Ball player. He feels like a poor man's Messi whenever I use him (that's a compliment!).

Kubo has many useful skills, such as "Step on Skill Control" for quick turns and in my opinion the best dribbling skill in PES, the "Double Touch". In my opinion, he is better suited as an AMF (where that "Creative Playmaker" playing style shines); I'm not a fan of using him on the right.

He does have a downside: his poor form shows he won't be very consistent on C Live Condition weeks. His weak foot was never a problem to me.

Kubo is still very young, so if you have the will and discipline to train him all the way to the max, his overall rating will reach 89, highlighting his great dribbling stats.

You can scout him for free by combining "Spanish League", "Asia-Oceania", and "RMF", averaging 3 stars. 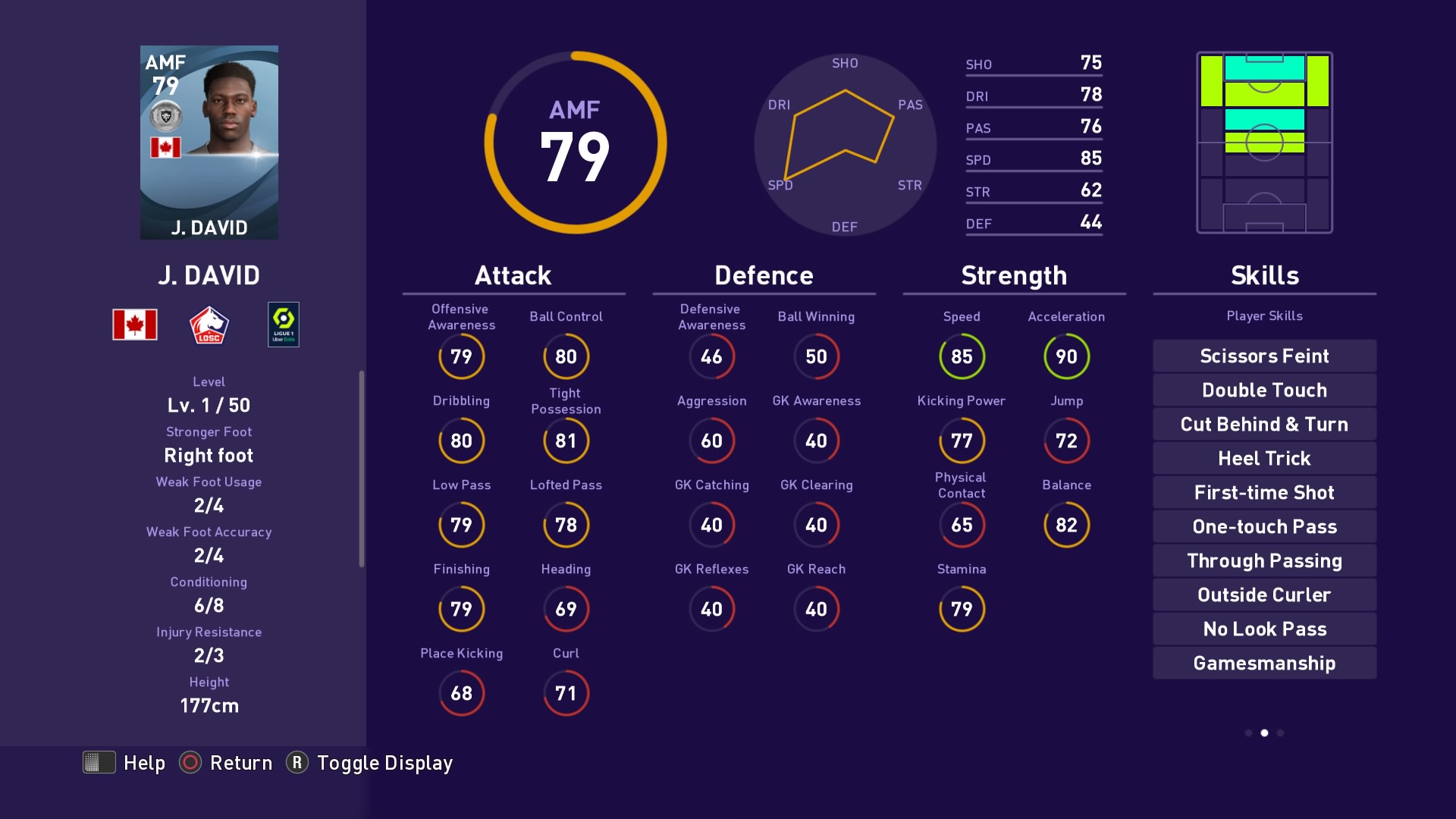 Jonathan David looks like an absolute superstar for a Silver Ball player. With many different useful skills, such as "One-touch Pass", "First-time Shot" or the "Double Touch", he can pass, shoot or dribble.

You can use him as an AMF (my recommended position, with the best Playing Style for that role) but you can also use him as a CF - he has very good finishing and if you like pacey forwards he will be your cup of tea.

"Speed" is actually his strongest attribute - 94 Speed and 97 Acceleration when maxed - and his 6/8 Conditioning won't let you down for most matches either.

You can scout this player by using only free scouts (100% chance) - French League / N/S American / AMF - which will come in handy to make sure you reach the last of his 50 levels. 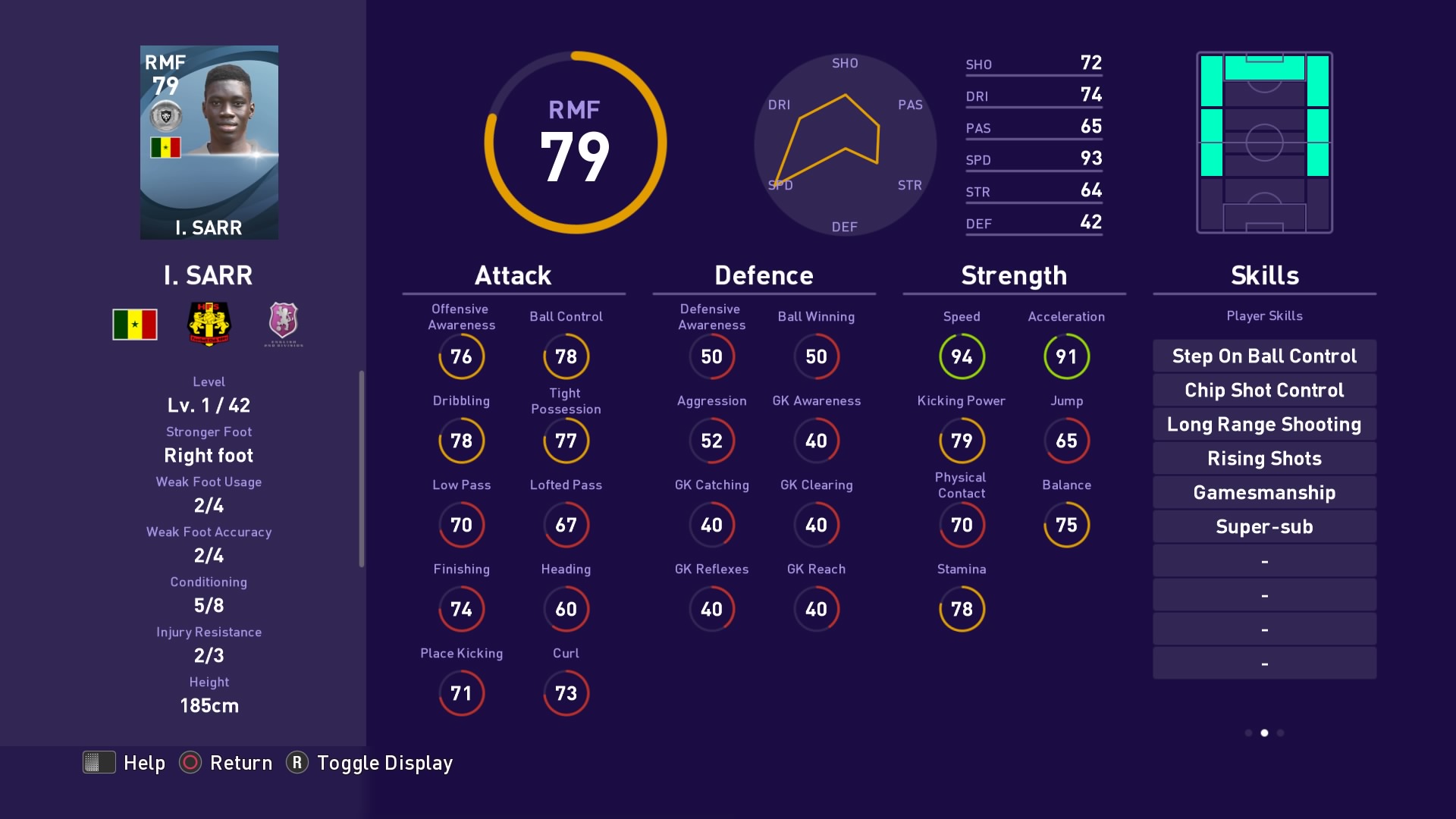 Sarr looks like one of the best wingers in the game. He can play on both wings (as a midfielder or as a forward), has insane speed and good dribbling stats. His "Super-sub" skill is also something to take under consideration.

Alternatives: There are many quality wingers who happen to be Silver Ball players in PES 2021. Have a look at H. Onyekuru (Monaco), C. Hudson-Odoi (Chelsea), and Diaby (Bayer Leverkusen) - all have great pace and dribbling stats, so it will be a matter of their Live Condition rating for that week.

H. Onyekuru was featured in my list last year and is a really fun player. 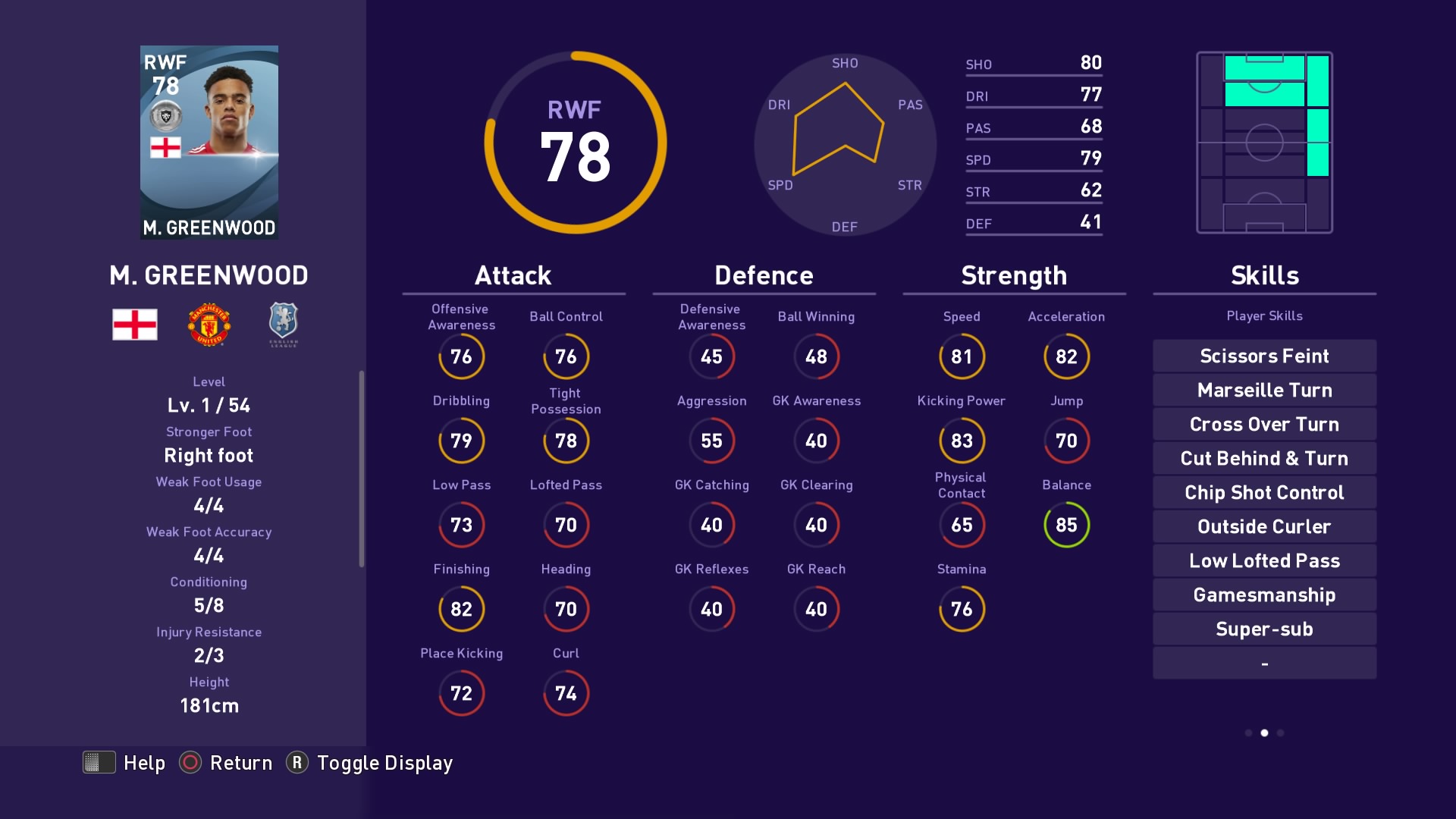 Ole Gunnar Solskjaer has praised Greenwood's natural finishing in the past, and you will probably agree after playing a couple of games with this boy.

You won't find many players with 4/4 on both "Weak Foot Usage" and "Weak Foot Accuracy"; this means that while controlling Greenwood, you won't need to think about the best foot to finalize that play. I wouldn't use him on the wing, but as a CF.

Speed and Balance are his main assets, but he has very balanced stats when it comes to shooting and dribbling, and many important skills such as "Chip Shot Control" when facing the keeper or "Cut Behind & Turn" for quick turns. He also has the "Super-sub" skill.

His conditioning (5/8) is a bit worrying but he has been playing often, so if he scores a lot this season the arrows shouldn't be a problem on most weeks.

You can get Greenwood with a 50% chance by combining these 3 scouts - "English League", "RWF" and "Finishing".

Alternatives: Rafael Leão (AC Milan) and Chalov (CSKA Moscow) are two other Centre Forwards definitely worth a mention. Both are fun players to use (Leão was actually featured in my list last year).